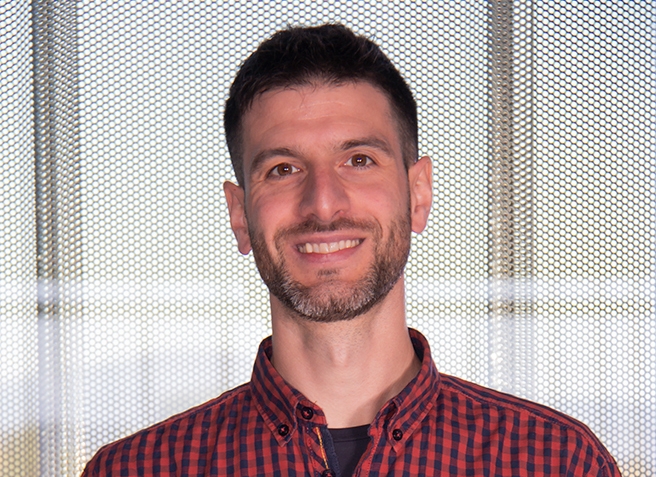 Giorgio Baraldi studied Physics at the Università degli studi di Modena e Reggio Emilia. In 2008, he obtained his master’s degree in Physics with a thesis titled “Magnetic properties of Fe and Ni alloy grown on GaAs for variable thickness and composition”. He developed his thesis at the Elettra Synchrotron facilities (Trieste, Italy) during 9 months. In 2009, he moved to Madrid (Spain) to join the Laser processing group of the Instituto de Óptica of the CSIC to carry on its doctorate. In 2010, he obtained a 4-years Jaepre grant, funded by CSIC, to cover PhD studies under the supervision of Dr. J. Gonzalo de los Reyes. During this period, he has focused his efforts in fabricating plasmonic nanostructures containing metal nanoparticles (NPs) using pulsed laser deposition technique. In February 2015, he obtained his PhD with a thesis titled “Pulsed laser deposited silver nanostructures for molecular sensing and photovoltaic applications”. In January 2015, he applied for a post-doctoral grant (PALSE programme) at Université de Lyon (France) with which he was finally granted. He started to work on a French national project titled “Laser induced nanoengineering of surfaces for sensor and photocatalytic applications”. The project was carried on at the Laboratoire Hubert Curien of the Université Jean-Monnet in Saint-Etienne (France) under the supervision of Dr. N. Destouches. He focused his research on studying the effect that CW laser irradiation has on the self-organization of metal NPs. He received co-funding from the People Programme (Marie Curie Actions) of the European Union’s Seventh Framework Programme (FP7/2007-2013), through the PRESTIGE programme coordinated by Campus France. In 2016, he joined CIC energiGUNE within the Advanced Surface Analysis (AIA) group, headed by Dr. M. A. Muñoz. He was involved in a European project titled monolithic batteries for spaceship applications (MONBASA). His tasks were mainly related to the production of ceramic electrolyte using RF magnetron sputtering technology. He was involved in the characterization of the developed film using XPS and SEM, as well. Currently, he is involved in an industrial project for fabricating thin film anodes feasible for large-scale high energy density solid state Li-ion batteries. Along with this project, he takes part to the Surface Analysis Platform (SAU) activity for developing new instrumentation.