The Ukrainian scientist’s candidacy has achieved second place overall in the Energy and Transport Area. The grant, awarded as Senior Researcher, is linked to the development of his research career at CIC energiGUNE during the next five years.

Yaroslav Grosu, Ukrainian researcher at CIC energiGUNE, the Basque research center of reference in battery storage, thermal energy solutions and hydrogen technologies, and member of the Basque Research & Technology Alliance-BRTA, has obtained a “Ramón y Cajal” grant, awarded by the State Research Agency to R&D Centers of Spain so that doctoral research personnel can continue developing their research careers. This grant, one of the most prestigious ones in Spain, has a duration of 5 years.

“It is a great honor to receive this recognition both from a personal and professional point of view, as it will allow me to maintain the work and line of research I am developing in Vitoria-Gasteiz with greater security”, has said the Kyiv- born scientist. “The focus of my current work is the investigation of interfacial phenomena for thermal and thermo-mechanical energy applications such as heat storage, molecular springs, compatibility of storage material... and this recognition is an endorsement of my research activity”.

Doctor Grosu applied for the Ministry for Science, Innovation and Universities grants in the Energy and Transport Area, where he competed with other researchers from all over Spain to obtain one of the 347 grants contemplated. After the analysis process carried out by the State Research Agency, the CIC energiGUNE scientist obtained the second place in the award list, in the specific field of Energy and Transport. 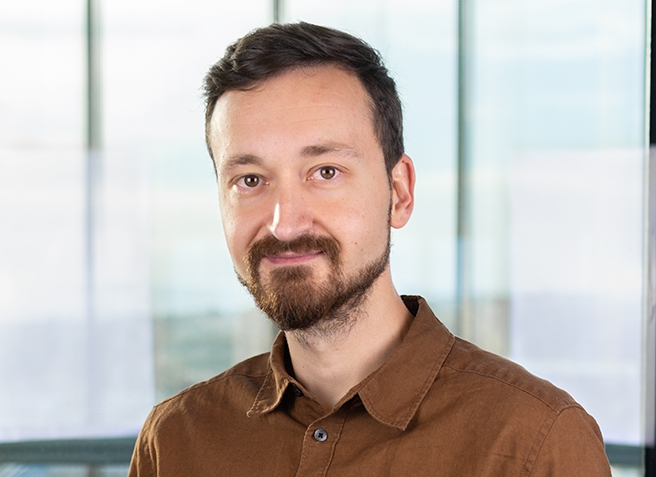 Yaroslav Grosu is currently Group Leader of ‘Interfacial Phenomena and Porous Media’ at CIC energiGUNE and is one of the six scientists from the Basque center mentioned in the “Ranking of the World Scientists 2021”, a global reference publication for research work carried out annually by Stanford University and the academic published Elsevier with the aim of highlighting the most influential scientists in the world. Doctor Grosu occupies a relevant place in this list in the field of Applied Physics.

Yaroslav Grosu’s career at CIC energiGUNE dates back to 2015, through a temporary contract as a Postdoctoral Researcher. From here, he went on to work in the Thermal Storage Area until occupying his current position as Group leader. Previously, Grosu had completed doctoral studies at Blaise Pascal University, as well as the National Technical University of Ukraine in Kyiv. His international research experience includes the University of California at Davis, the University of Birmingham, the International Iberian Nanotechnology Laboratory and Sapienza University of Rome. All throughout his career he has produced 75 scientific publications and 2 patents, with over 1000 citations during the last 5 years. His work has been presented at 40 international conferences.

As established by the State Research Agency, the “Ramón y Cajal” grants are aimed at promoting the incorporation of national and foreign researchers with an outstanding track record in Spain’s R&D Centers. The selection is based on a rigorous process of competitive concurrence of candidates based on their curricular merits and on their capacity to lead a line of research, according to the scientific and personal experience as well as to the independence of their trajectory.