Fibers with thermal energy storage capacity have high applicability in the production of textiles with thermal regulation technologies, thermal control and protection. In CIC energiGUNE, we have developed a research based on microfluidics for the production of flexible fibers, effective in terms of thermal storage and with excellent anti-leakage properties.

The concept of fibers, which is ubiquitously found in Nature, is known to be a collection of cells of high mechanical strength that works as a vital instrument of plants and species´ body functioning. No wonder that, thanks to the ability of humans to mimic Nature, nowadays, the field of fibers has extended to light and heavy industries, telecommunication, medicine and many more.

Moreover, the continuous expansion of this area now is approaching to Thermal Energy Storage sector as one of the key elements for the decarbonization of the global economy.

The methods for encapsulation of Phase Change Materials into fibers are attracting high attention from researchers. The so-called PCMs allow the storage of large amounts of thermal energy thanks to phase change processes (from solid to solid or solid to liquid) favoring a constant temperature. These, in combination with fibers, have a high applicability for textiles production with Thermal Regulation, Thermal Energy Storage and Thermal Protection technologies.

In the specific case of fibers, an important advantage is that they can further be shaped using standard and well-developed processes such as weaving, knitting etc. promoting their sooner production at an industrial scale and market approach through their commercialization consequently.

Several approaches have been currently undertaken by researchers for fibers production with Thermal Energy Storage capacity:

The first of them is the incorporation of encapsulated Phase Change Materials into traditional fibers that are already available on the market. This is a two-step method mainly focused on creating fabrics with thermal regulation. It requires first producing encapsulated Phase Change Material and later binding it to the commercial fibers by pad-dry-cure method or other.

The main drawbacks of such an approach are the limited maximum load of Phase Change Material and the strong reduction of thermal storage capacity due to wearing conditions over time (rinsing, washing or abrasion).

For this reason, researchers have come up with another approach for Phase Change Material encapsulation into fibers that is based on the coaxial jet elongation under the electric field known as co-electrospinning. This method of fiber production uses electrical force to draw charged yarns of polymer solutions or molten polymers until reaching fiber diameters of the order of a few hundred nanometers.

Despite the high storage capacity that can be achieved by this method, the low speed of production, the requirement for a high voltage source (from 10 to 20 kV) and the limited possible range of fiber´s diameter are important drawbacks of this method.

A third approach is melt-spinning and melt-blowing, which are two similar methods for producing fibers and fibers with PCMs. The first one uses mechanical force to form and elongate the fiber from a melt, while the second one extrudes the polymer melt through small nozzles by the kinetic force of a gas jet. The advantage of those methods is their simplicity and the absence of solvents, while the disadvantage is their applicability, which is limited to thermoplastic fibers.

Finally, microfluidic principles have been recently applied for fiber production. In this technique, flow-focusing or coaxial flow schemes are used to manipulate, shape and control the dimensions of the fibers with high precision. Fiber-forming material dissolved in a proper solvent is getting in contact with a secondary fluid that initiates fiber wall formation due to the solvent extraction process. This method provides high flexibility of control of fiber dimensions. It can also be used for hollow fibers or fibers that contain Phase Change Material production. Despite this method has high scalable potential, it requires microfluidic chip production and pumps capable of controlling precisely the flow rates during the production process.

Within the framework of ThermLab, CIC energiGUNE has launched the investigations aiming at microfluidic principles application for fiber production to be applied in the field of Thermal Energy Storage and Thermal Control. In particular, a significantly simplified (chip-less) method was developed to create flexible hollow and polymeric fibers containing Phase Change Material. The formation of the fiber is aided by gravity, and the experimental setup is as simple as glass capillary connected with the syringe pump and a glass beaker (see the scheme). 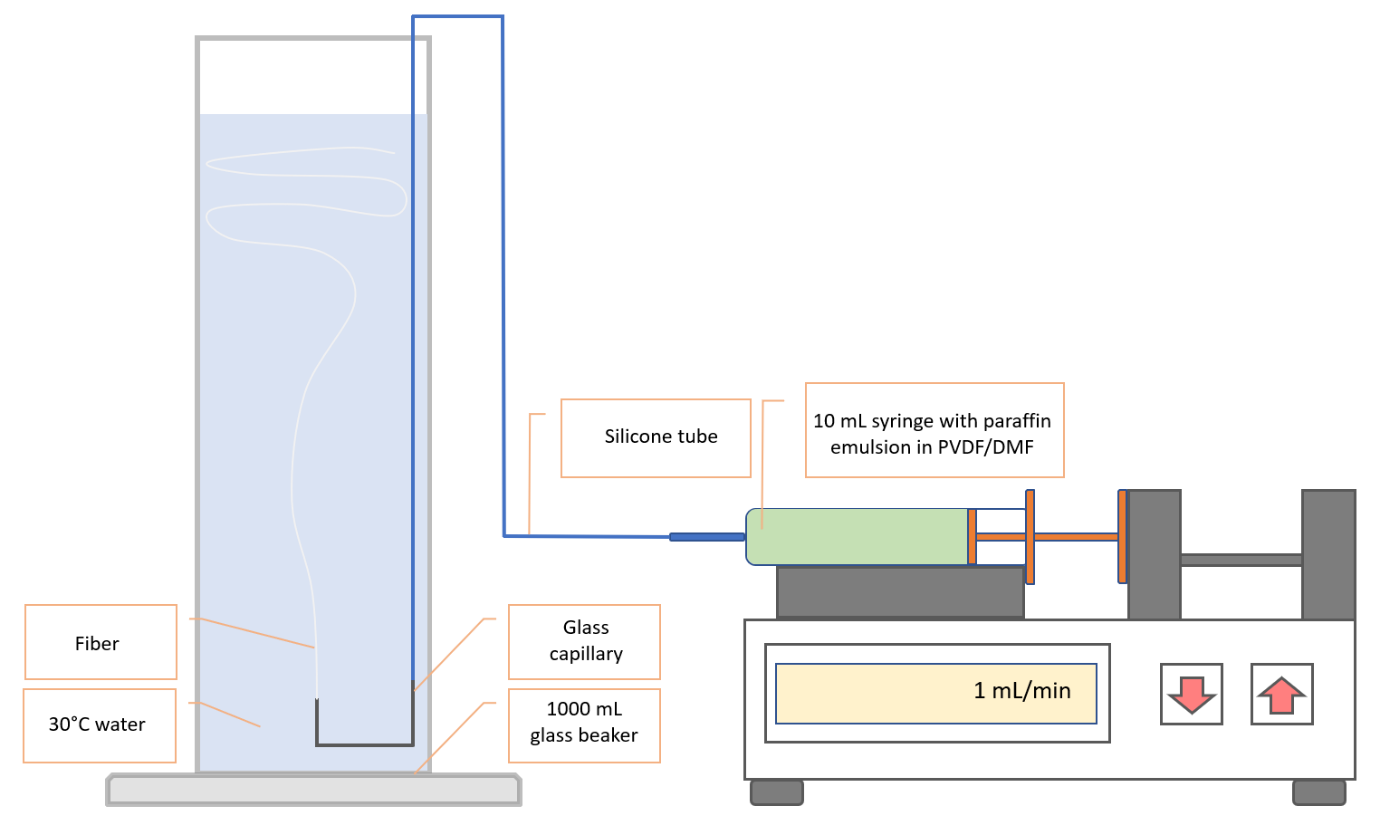 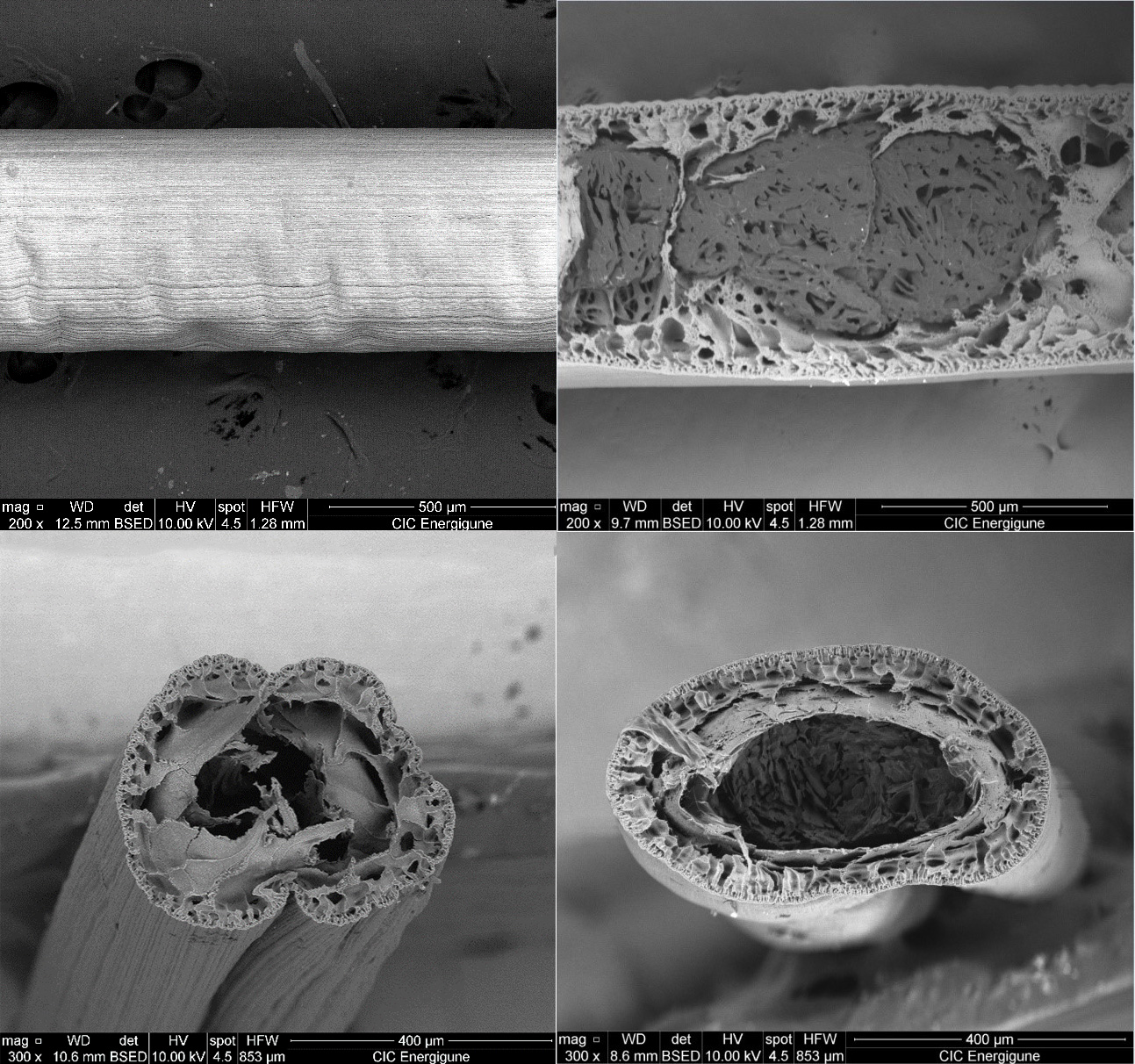 The ability of composite fiber to prevent Phase Change Material leakage is highly important for most applications. A leakage test performed for the produced fibers confirmed their excellent anti-leakage property. No more than 3.5% of mass loss was observed after 1000 melting/solidification cycles.

Thanks to this research, CIC energiGUNE developed a facile route of fibers with thermal energy storage capacity production was developed. The field of their application is very broad, for example, as a material for the electric battery thermal management systems or buildings with a low environmental footprint. The simplicity of the method and it´s high scalability makes it a good candidate for rapid transfer to the industry. 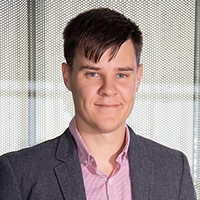