At CIC energiGUNE we are committed to Li-ion Capacitors, an innovative storage system that is set to play a leading role in the technological transition that today´s society will undergo.

These types of capacitors have the potential to act as a bridge between batteries and supercapacitors; a key factor in the process of decarbonizing the economy towards electric mobility and sustainable generation based on renewable energies, as well as the Internet of Things. In this article you will discover how and why.

These challenges demand storage systems that have both high energy and power density, as well as long-lasting cyclability, without forgetting, of course, security and a competitive market cost.

Currently, the existing solutions on the market are able to offer high energy densities (Li-ion batteries) or high-power densities and cyclability (supercapacitors).

Unfortunately, batteries and supercapacitors are complementary technologies. This means that the strength of one is the weakness of the other, and vice versa, and there is no comprehensive solution that combines all the requirements that most applications demand.

This is the rationale for Li-ion capacitors: the search for balance between the parameters of energy, power and cyclability.

On the one hand, batteries store the electric charge by means of irreversible chemical processes, kinetically limited by the diffusion of ions through the crystalline structures of the materials involved in these reactions.  Consequently, they allow storing large amounts of energy at low power and at the cost of having a finite number of charges and discharges.

On the other hand, the processes governing the storage of charges in supercapacitors are based on physical processes of adsorption on the surface of the materials. This limits the stored energy, but it is available even at rates below the second, with almost infinite cyclability.

In this context, Li-ion capacitors are born from the hybridization of Li-ion batteries and supercapacitors, with the final objective of closing the gap between energy and power of both technologies.

The concept is very easy to visualize through a parallelism with athletics. The batteries would be the marathon runners, ultra-endurance athletes who have a lot of energy in the long term.

The supercapacitors would be the 60-meter sprinters, very explosive athletes of great power, capable of releasing a lot of energy in a very short time.

Finally, the Li-ion capacitors would be similar to the medium-distance athletes, capable of running the 5000 meters at very high speeds, in other words, athletes who have a lot of energy that they deliver at high power for quite a long time. 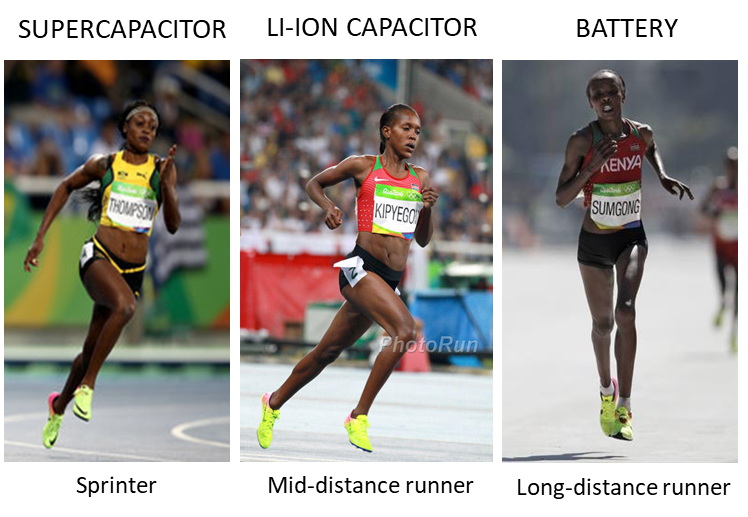 Sustainability as a key point

But not everything is about energy, power and cyclability. Environmental sustainability is an indispensable criterion for ensuring a future for coming generations.

For this reason, Li-ion capacitors developed at CIC energiGUNE are based on carbons obtained from recycling bio-waste, with the aim of creating a technology with the lowest possible environmental impact. Specifically, the coals that have been used for the development of our device have been obtained from recycling olive pits, a waste generated by the olive oil industry, thus promoting circular economy.

Through carbonization process of the olive pit at high temperature (700ºC) we obtain a hard carbon, which is used as an anode in the negative electrode. The hard carbon stores the charges in a faradic way, providing energy to the device.

The same hard carbon, through a subsequent chemical activation, is transformed into an activated carbon, with a specific surface area that can reach up to 3000 m2 g-1. The activated carbon is used as a cathode in the positive electrode and stores the electrical charges in a capacitive way, providing power to the device.

Thanks to the fact that the device consists only of carbon, it implies a total recyclability.

However, not all are advantages.

The toll to be paid for developing a carbon-only device is the absence of the ions in the system to store the electrical charges. In other words, our Li-ion capacitor lacks Lithium ions.

In order to solve this paradox, we have developed a lithium salt that we call "sacrificial salt". This salt decomposes at 3.8 V .vs Li/Li+ giving lithium ions and CO2 gas (in very reduced quantities), which is evacuated from the system after its generation.

Thus, in the first charge of the storage system, which goes up to 4 V, lithium ions released from the incorporation of the sacrificial salt in the positive electrode travel to the negative electrode where they are inserted in the hard carbon. This process is reversed when the device is discharged.

And so, again and again, for hundreds of thousands of cycles.

Today, lithium-ion capacitors offer 3-4 times more energy than supercapacitors at similar powers, however, they still have a long way to go to approach the energy levels of batteries, which are still about 5-10 times higher.

Application of lithium-ion capacitors in the market

From the market and technology transfer point of view, one of the objectives of CIC energiGUNE is to contribute to the competitiveness of the companies in the closest environment, applying the results in the market. In this context, there are many niche applications in which batteries are oversized or the power level required from a supercapacitor is not so high, making li-ion capacitors the ideal solution.

For example, as a support to the batteries of the electric vehicle, assisting in the recovery of kinetic energy during braking (KERS) or in the current peaks generated during starting, or in the use of auxiliary systems to achieve a more efficient, longer lasting and more autonomous storage.

Also, in renewable energies, such as wind power, where it would be possible to take advantage of the current peaks generated by strong winds that the battery will lose by not reaching those currents. Or solar energy, where it would take advantage of even the smallest current generated in low light conditions that the battery cannot absorb because it does not reach a voltage treshold.

Apart from the opportunities in large markets such as urban electric mobility and stationary storage in renewable energies, there are many applications such as vertical mobility, or the Internet of Things where a solution based on Li-ion capacitors would provide simplicity and economic viability.

Not in vain, Aurea mediocritas is the Latin term that alludes to the pretension of reaching a desired balance between the extremes and that Aristotle associated posteriori with virtue.

The development carried out at CIC energiGUNE in this area may represent an interesting advance for those companies working in the field of capacitors such as Skeleton and Murata, as well as for Basque companies such as Koneika, or Cegasa.

Surely, in the future, Li-ion capacitors will be the talk of the town, because virtue lies in balance. 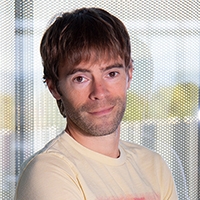