Around 150 professionals from all over Europe attended the summit, with representatives of the three main initiatives being developed in Europe to advance technological development and promote the development of an industry in its own right.

Batteries Summit 2019, the European summit meeting on batteries organised by CIC energiGUNE and held this morning in the Álava Technology Park, has highlighted both the challenges and opportunities facing Europe in this field and the importance of advancing in the development of new technologies that guarantee a competitive position in the electric car market. "Europe must invent the batteries of the future", warned Kristina Edström, coordinator of BATTERY 2030+, one of the main initiatives launched by Europe to promote scientific research to reduce the technology gap with other leading economies in this field.

The summit was opened by Nuria Gisbert, Director General of CIC energiGUNE, Ana Oregi, Deputy Mayor of Vitoria-Gasteiz, and Ramiro González, President of the Provincial Government of Álava, all of whom highlighted the importance of the work being done by CIC energiGUNE to position Álava and the Basque Country amongst the most advanced economies in this field, as well as their direct relationship with the country´s strategic commitment to knowledge and the new economy.

The event, defined as the "summit of the European ecosystem for the battery revolution", was divided into two parts. In the first part, the initial presentation was given by Kristina Edström, who combines her coordination work in BATTERY 2030+ with her teaching work as Professor of Inorganic Chemistry at the University of Uppsala (Sweden). Edström warned that Europe has very clear objectives to meet in order to advance in this field, which include "developing disruptive technologies for the value chain of the automotive industry" and, especially, "inventing the battery of the future". 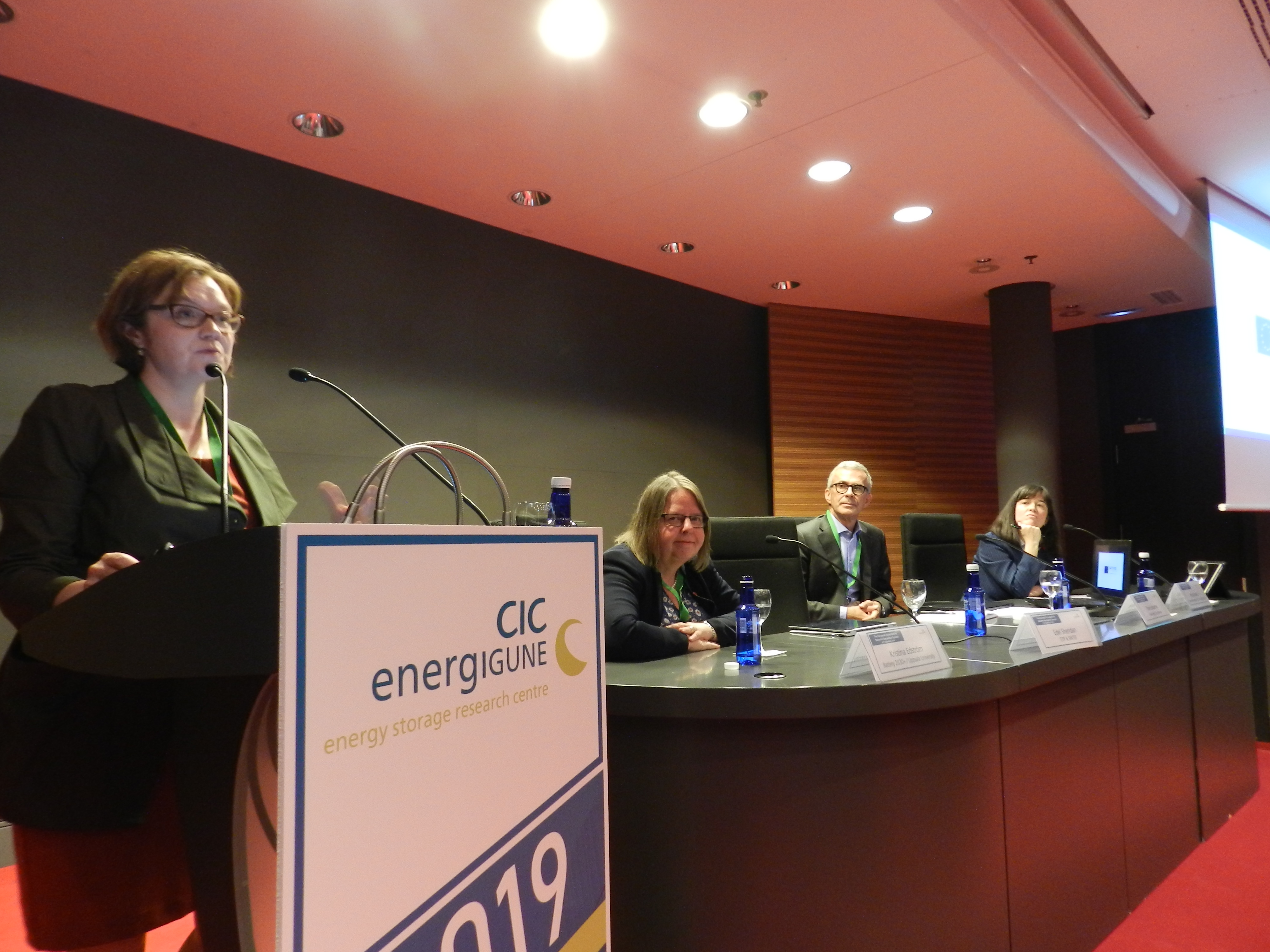 The coordinator of BATTERY 2030+ acknowledged that the European Commission has asked them to work very quickly in developing technology to reduce the gap with other countries, such as the U.S. or China, and presented some of the projects that may mark that path in the future, such as fitting sensors into batteries or the identification of self-repairing material.

In this sense, the representatives of the other two major European initiatives, BatteRIes Europe and the European Battery Alliance, agreed on the need to work together along these lines. Edel Sheridan, representative of the European Technology and Innovation Platform - BatteRIes Europe, reiterated his commitment to promoting research at all levels and identifying new applications and markets to boost European industry.

For his part, Thore Sekkenes, director of the Industry Programme of the European Battery Alliance, explained that in 2016 Europe had lost the race for the new battery, but that today the scenario has changed, pointing to the setting-up of battery factories in Europe in the foreseeable future. "We estimate that in 2025 we will need 30 gigafactories and in 2050, 350. In 3 years we can surpass the US in battery production," he said.

In the second part of the summit, Álvaro Martín-Aceña, Head of the Alternative Mobility Area at the Ministry of Industry, Trade and Tourism, and Juliana Restrepo, Director General of AEPIBAL (The Batteries and Energy Storage Business Association) and representative of the Spanish BatteryPlat platform, outlined the scenario of the Spanish ecosystem and its particular challenges.

The meeting was closed by the Basque Government Minister of Economic Development and Infrastructures, Arantxa Tapia, who highlighted the strength of the Basque energy storage industry and, especially, of all the players currently represented together in the BRTA (Basque Research and Technology Alliance), a scientific and technological consortium of which CIC energiGUNE is a member. " The Basque Country has to be involved in the development of this industry, we have the knowledge and the industrial fabric to do so", she concluded.