This research work is framed within the project Laser4Surf, in which 8 European entities have taken part, and its results open the door to the use of laser technology on a large scale in order to functionalize metallic surfaces.

CIC energiGUNE, the Basque research center of reference in storage in batteries, thermal energy solutions, and hydrogen, and Ceit, Basque research center specialized in materials, manufacturing, mobility, digitalization and circular economy – both members of the Basque Research & Technology Alliance-BRTA, have completed the research work that will allow to use laser technology on a large scale in order to functionalize copper surfaces and turn them into current collectors for lithium-ion batteries.

“Thanks to this research work, we have managed to manufacture current collectors that allow for a better adhesion between the electrode and the collector, as well as a better behavior at high densities of current”, has manifested Miguel Ángel Muñoz, person in charge of the research at CIC energiGUNE. Along these same lines, Ainara Rodriguez, head of the research at Ceit, has assured that “in addition to the improvement in the collectors’ performance, we have been able to optimize the laser process of the texturing of the copper at speeds that allow us to implement it at an industrial level in this application and many others”.

The research is framed within the European project Laser4Surf (Laser for mass production of the functionalized metallic surfaces, by its English acronym), which had as its main objective the use of laser technology on a large scale for functionalizing metallic surfaces, specifically titanium, stainless steel and copper, and thanks to the work carried out by the consortium they have been validated for their application, respectively, in three particular uses: implants, linear encoders and batteries. 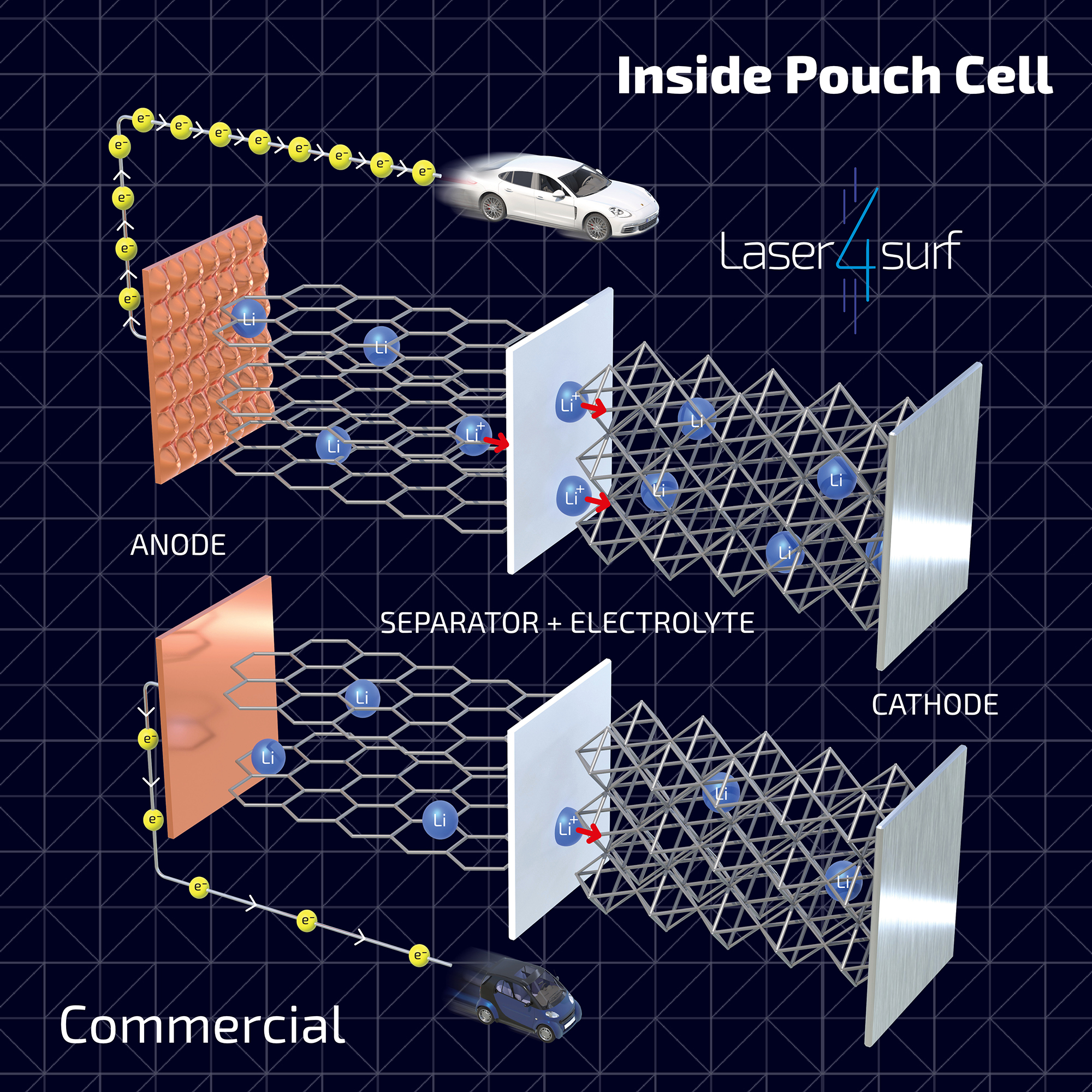 Besides being the coordinator of the project, Ceit’s task has revolved around the development of processes of functionalization for the three aforementioned fields of application. As a result from this work, Ceit has developed a software platform that allows the final user of a laser system the automatic selection of the parameters of the process that leads to a desired functionality, without the need of deeply understanding the process of LIPSS generation, which greatly simplifies the industrial implementation of these processes.

By its part, CIC energiGUNE has participated in the project validating the structured copper surfaces –at a nanometric level- as current collectors for lithium-ion batteries. In this sense, the modification of the current collector’s surface, in comparison with the models used until now, have resulted in a better adhesion between electrode and collector and a greater quantity of active material per surface unit. Furthermore, it has made possible the usage of water as a solvent for preparing the electrode without needing to resort to organic solvents that generate toxic vapors.

The comprehensive work carried out within the frame of Laser4Surf has allowed confirming that the nano structuration produces as a result an improved charging-discharging capacity for all the electrodes and cell configurations. In fact, batteries can be charged and discharged faster while maintaining higher current densities.

Moreover, the cell prototype in a full pouch format demonstrated a higher capacity of retention, with which its has improved the life cycle as well as the adherence and roughness of the current collectors with the electrode’s material, because the improvement of the adherence increases the number of cycles.

Together with Ceit and CIC energiGUNE, the participant organizations at Laser4Surf have been: LASEA. MULTITEL, IRIS, FAGOR AUTOMATION, RESCOLL and The European Science Communication Institute (ESCI).