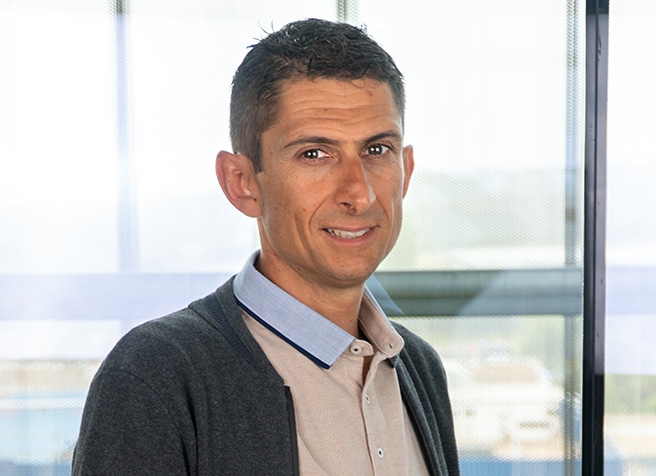 Roberto is graduated in Physics from the University of The Basque Country in the division of Electronics and Automatics. He was awarded his PhD in solid state physics by The University of London -Imperial College London- in 2003. His thesis was devoted to the study of different conjugated polymers as organic active semiconducting materials for their use in photovoltaic devices. He characterized all the processes that take place in a solar cell from the point when light is absorbed until charge collection occurs at the electrodes. Charge transfer, charge recombination, and charge transport and collection were addressed by the use of experimental techniques as time of flight photocurrent, transient absorption and ultra-fast photo-induced absorption spectrescopy.

After his thesis, he stayed at Imperial College London as a post-doctoral assistant collaborating with companies as The Dow Chemical and Matsushita Electric Works -PANASONIC- characterizing the stability of organic photovoltaic devices. He later joined Siemens AG Innovative Electronics with a Marie Curie Industry Host Fellowship with the objective of demonstrating organic electronics technologies in functional applications as active displays.

After short stays in The University of Mondragon and CIDETEC he joined IKERLAN, where he has been for the last 14 years, as project leader in the fields of organic photovoltaics and microelectronics; Responsible for H2020 projects of Research Line “Smart System Integration for Industrial Applications”; and secretary of the Administration Board.

He has coordinated research national and european projects with individual budgets over 500k€. He also has strong experience on transferring newly developed technologies to industrial products and services supported by private and public funding. Examples of this trajectory are the integration of nano-structured organic light emitting diodes in commercial optical encoders, synthesis and development of quantum dots based nano-optical labels for medical applications and integration of advanced sensors in rotating heads of milling machines.

He has an h-index of 20 with 36 publications and over 2300 citations. He has also supervised 3 PhD thesis.

In 2017 he obtained an Executive MBA from the University of the Basque Country where he was awarded with the best Business Plan for a technological start-up targeting the fabrication and commercialization of organic thermoelectric generators to power electronic devices.

In 2019 he moved to the Power Electronics Department of IKERLAN where he collaborated in projects related to hybrid energy storage systems based on high energy and high power units.