What is an Ionic Liquid?

It is not a question with an easy or a straightforward answer. In the words of Prof. Tom Welton from Imperial College London, “…an ionic liquid is a salt that does not make a very good solid”. In general, an Ionic Liquid -literally “liquid salt”- can be defined as any salt that melts (becomes liquid) before decomposing.

Ionic liquids are often composed of both organic and inorganic cations and anions. There is an extensively but controversial accepted division of these ionic materials into two groups: the so-called “room temperature ionic liquids” that are those salts becoming liquid around or below 100 °C, and the so-called “molten salts” that melt at much higher temperatures (e.g., NaCl at 803 °C). This controversial division of ionic liquids is arbitrary based on melting temperatures, but it can also be justified on evident practical applicability differences between them.

In this post, we will focus on the so-called “room temperature ionic liquids”, their unique properties and their application scope.

A brief history of Ionic Liquids

The discovery of the first compound considered as an ionic liquid can be attributed to Paul Walden in 1914 when he was searching for molten salts that could be liquid at his equipment working temperature. This first described ionic liquid was ethylammonium nitrate ([EtNH3][NO3]) with a melting temperature of 12 °C, and it was the first ionic liquid reported in the scientific literature.

Afterward, the research and the potential of ionic liquids breakthrough went unnoticed for a long time. It was not until the 60s of the last century when the research on ionic liquids was promoted thanks to an initial research project of the U.S. Force Academy led by Major (Dr.) Lowell A. King. The main objective then was to find out a replacement for the LiCl/KCl molten salts electrolytes used in thermal batteries. Since then, the U.S. Force Academy bets on a continuous molten salts/ionic liquids research program where they developed many ionic liquids combining different cations and anions for almost four decades.

Some of the relevant ionic liquids discovered during the decades from the 60s to the 90s are shown in the following table. 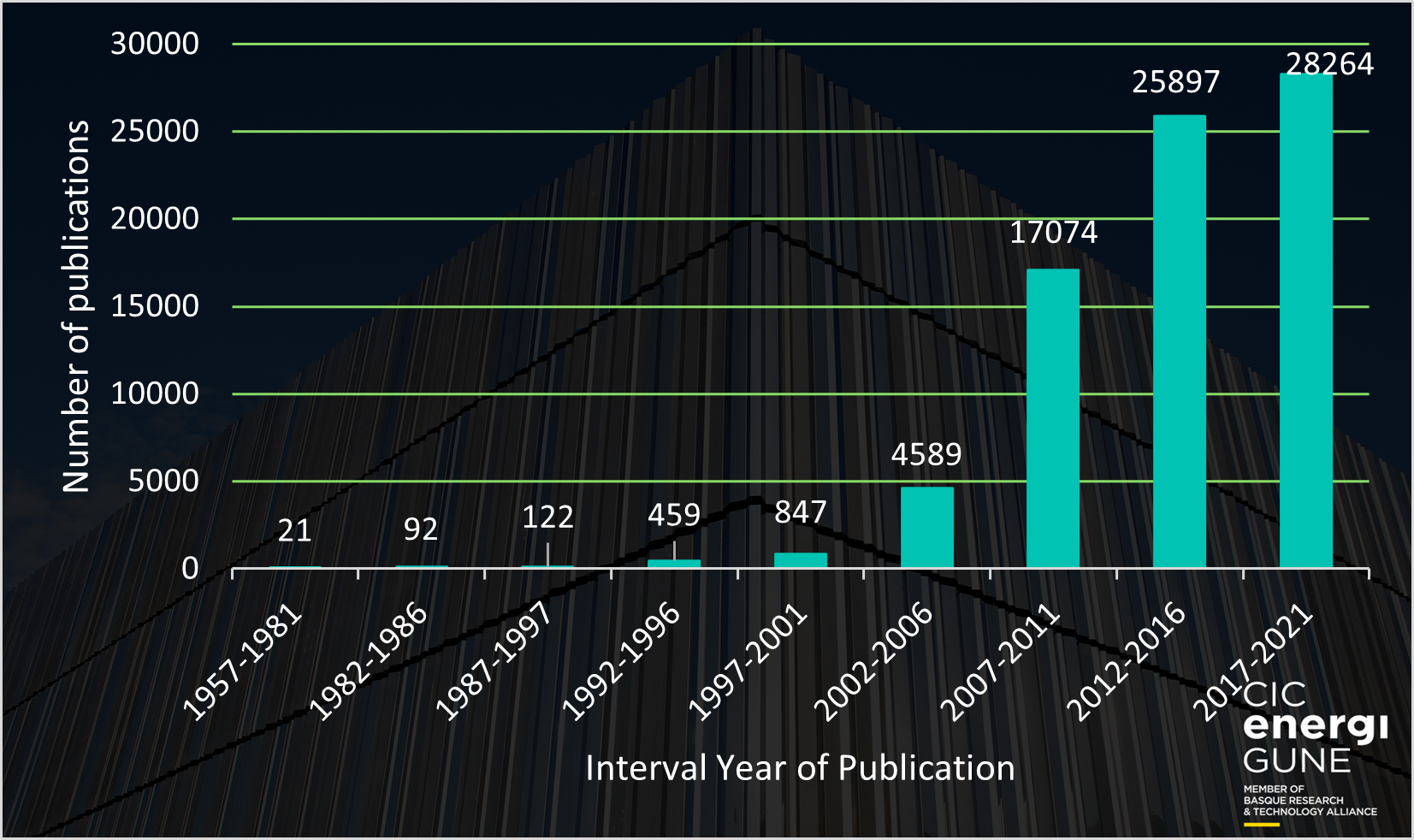 Ionic liquids possess unique properties which make these materials special for specific applications. In fact, it would be potentially possible to design and synthesize the ionic liquid with the required features for almost any application you could have in mind due to the boundless combinations of cations/anions that can be done.

Among the unique properties that the majority of the ionic liquids possess, the following can be pointed out:

In general, ionic liquids possess the typical properties of a solid even though they are in a liquid state. In addition to these features, ionic liquids are highly suitable for modifications by using synthetic tools e.g., by introducing functionalized groups in the cation or changing the anion to enhance or create the needed feature for a special application.

These inherent properties and their facile tunability make ionic liquids outstanding candidates to be employed in the H2 generation field as reaction media and/or co-catalyst and in thermal energy storage as phase change materials.

The following picture shows some of the most common cations and anions employed in synthesizing ionic liquids.

The ionic liquids can be divided into two big groups: aprotic and protic ionic liquid. Their synthesis, starting from the different selected cations and anions, can be performed in different ways:

On the other hand, synthesizing protic ionic liquids is easier by far, and they are obtained by simple neutralization between a Brønsted acid and a Brønsted base.  The selection of the cation and the anion is key and will determine the thermophysical properties of the ionic liquids and, consequently, their application scope.

Ionic liquids, due to their unique intrinsic properties, the almost unlimited cation/anion combination, and their relatively easy modification and/or functionalization, find applications in a very vast field: 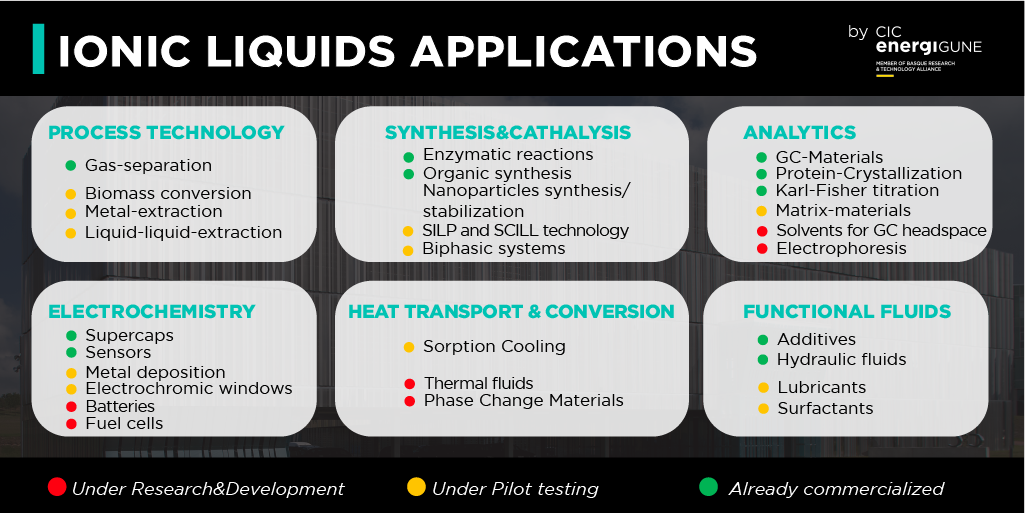 As can be seen, the application fields of ionic liquids cover Process Technology, Electrochemistry, Analytics, Functional fluids, Heat Transport & Conversion to Synthesis & Catalysis. Nevertheless, since selected cations and anions to form ionic liquids can be extended to almost limitless numbers, their potential applications will be increased in the future and will be limited only by the scientist’s imagination.

Industrial applications based on ionic liquids

It can mistakenly be thought that the main interest in ionic liquids is on the research level, but these unique materials have aroused the interest of many companies that have introduced ionic liquids in their processes:

In general, these examples show that due to their versatility and plethora of applications (the known and those coming), ionic liquid technologies can be implemented at the commercialization and industrial level. Nevertheless, the maximum potential of ionic liquids-based technologies is still yet to come and to exploit their unique properties at the commercialization level, the commitment of industries with fundamental research is of paramount importance.

Regarding the design, development and characterization of disruptive ionic liquid-based catalytic systems, at CIC energiGUNE, we aimed to obtain pure H2 and a valuable carbon material from the catalytic deconstruction of plastic waste (HDPE, PP and PS) under non-conventional heating methods.

When talking about the design, development, synthesis and characterization of novel ionic liquids for H2 storage, the research is focused on ionic liquids that possess thermal and chemical stability to resist hydrogenation/dehydrogenation conditions and with enough gravimetric hydrogen density (2-4 %) to be employed as liquid hydrogen carriers.

Concerning the design, development, synthesis and characterization of “organic ionic plastic crystals (OIPCs)” (a subclass of ionic liquids), at CIC energiGUNE, we are developing the research on OIPCs with high energetic solid-solid transitions to be employed as phase change materials to store latent heat for low/medium temperature applications (domestic and industrial fields); and also, in the frame of the ELKARTEK project CICe21 and an ongoing PhD thesis, we are gaining in knowledge by understanding the relationship between OIPCs chemical structure and their performance as phase change materials.

There is no doubt that Ionic liquids are materials with extraordinary properties and unlimited potential applications. Despite this, it remains still challenging to find the right cation/anion combination that could fulfill the required features for a targeted application. That´s why at CIC energiGUNE we work on new approaches to understand and develop ionic liquids with specific features to be applied in disruptive ionic liquid-based technologies (described above) for more sustainable applications in the field of thermal energy storage and catalysis. 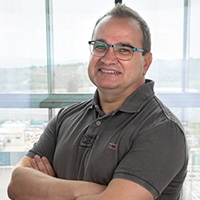