Spain´s potential in the Raw Material Industry for Batteries

As we have already seen in previous blog posts, the potential shortage of raw materials is one of the major challenges that different regions and countries around the world are facing to dominate a strategic industry for the future, such as the battery industry.

This explains the efforts that different governments and companies are making to guarantee their own supply chain, looking for "independence" or security that will allow them to establish a key activity for the upcoming energy transition.

Logically, the ideal scenario for consolidating the development of the industry is none other than having its own deposits, thus ensuring the availability of key materials such as lithium, cobalt, nickel or copper ( to mention just a few). Hence, regions such as Europe are encouraging their member countries to accelerate and deepen the process of identifying deposits and extraction projects, in order not to depend on third parties (especially Asia, and in particular China, a country that produces around a third of all the critical raw materials linked to the manufacture of batteries worldwide).

In this context, Spain can be one of the main players in ensuring that Europe does not lose ground in this race compared to other countries and regions, thanks to the availability and volume of deposits in its territory. In this way, an activity such as mining (which almost disappeared in Spain after the total closure of the coal mines a few years ago) could rise again to become a fundamental industry from both an energy and economic point of view in the coming years.

Deposits characterized by their variety and quantity

One of the keys to Spain´s high potential in the materials extraction industry for batteries is the diversity of raw materials available in the country. In Spain, it is possible to find fundamental resources such as Lithium, Nickel, Cobalt, Graphite, Copper, Aluminum or Manganese in different parts of its geography.

Moreover, in many cases, we are talking about deposits of large size and volume.  The best example of this is San Jose de Valdeflórez, in Extremadura, which has the potential to be the second largest mine in Europe (only behind the Portuguese "Mina do Barroso"), and which, together with the neighboring deposit of Cañaveral, aspires to position Extremadura as one of the main providers of this resource for the whole of Europe.

Hence, more and more companies are setting their sights on this region, both related to the extraction activity itself (examples are Infinity Lithium and Lithium Iberia) and companies associated with later stages of the value chain (Envision, one of the world´s leading cell producers, being the most prominent case).

But it is not only Extremadura that can be an important mining hub for the energy transition in Spain. Other regions such as Galicia, Castilla y León, Asturias and Andalusia also have resources within their territories with which to contribute significantly to the development of the industry.

In the case of Galicia, in fact, work is already underway to exploit this potential. In recent years, several deposits of Lithium, Copper, Cobalt, Aluminum and Graphite (as well as other fundamental raw materials for other industries or activities, such as Gold or Tin) have been identified both in the north and south of the region (especially in the province of Ourense). Moreover, in many cases, these are deposits where several of these materials are available at the same time.

This is making the region in northwest Spain increasingly attractive for exploitation by large mining companies such as Atalaya Mining or Eurobattery Minerals, which have already expressed their interest in developing projects in Galicia.

Likewise, neighboring Castilla y León and Asturias are also exploring their potential to play a leading role in mining activity. In the case of the former, it has a high potential to be a source of Lithium (especially Zamora and Salamanca, provinces close to the north of Extremadura) as well as, at a lower scale, of Cobalt and Graphite. For its part, the Asturian region has several manganese deposits that complement the "supply" of resources available in Northern Spain.

Finally, within Andalusia (and again, especially in those provinces bordering Extremadura) there are large deposits of materials such as Copper, Nickel or Cobalt. This explains the interest that companies such as First Quantum Minerals or again Atalaya Mining have shown in expanding their capacities and activities within the region to the south of Spain. 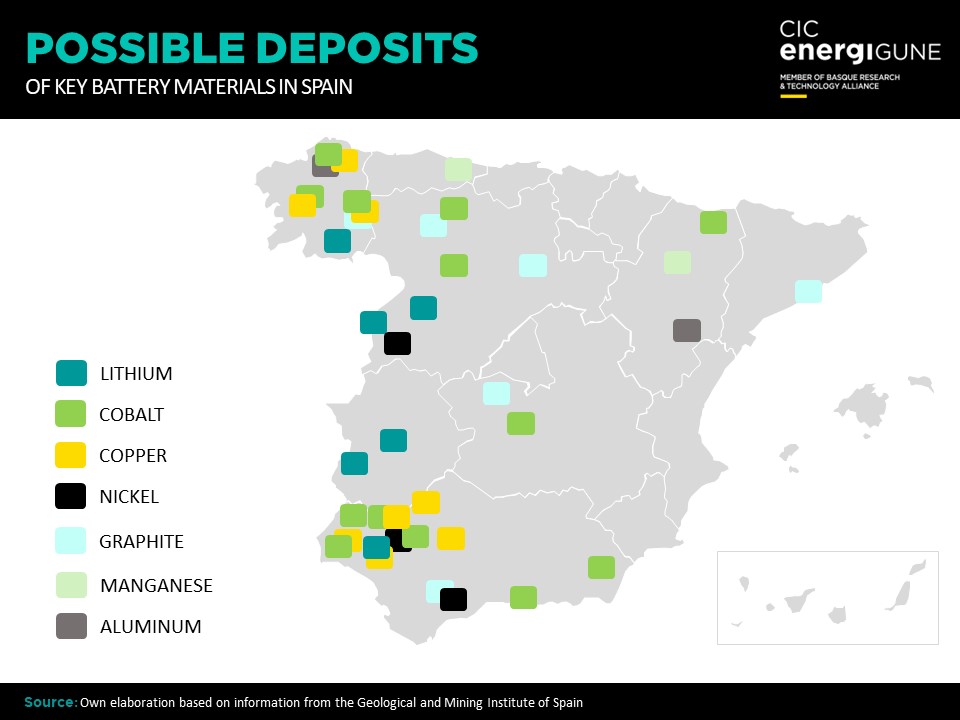 Despite all this range of resources and opportunities, there is a fundamental issue to be resolved by Spain if it wants to exploit this potential at its full potential. It is a question of establishing a sustainable mining model that really guarantees the transition towards a new energy model that respects the environment.

This has been proposed by the EU itself in its roadmap towards a sustainable mining model, with the aim of exploring and exploiting these deposits in a less invasive and more efficient way.

This is the major obstacle that state and regional governments in Spain, and interested companies are encountering when it comes to promoting projects associated with the exploitation of these deposits. The opposition of neighbors and associations in defense of nature (as in the cases of San Jose de Valdeflórez in Extremadura or the Touro mine in Galicia) is based on the high environmental impact that this type of project usually entails, which is causing justified delays that seek to ensure the sustainability of the projects that are intended to be developed in the potential locations listed above.

As a result, the promoters of these initiatives are rethinking their projects and launching new proposals aimed at reducing the environmental impact of their exploitation plans as much as possible: burying the mines underground, using state-of-the-art equipment, applying advanced geometallurgy techniques or waste treatment and recycling are just some of the measures proposed to guarantee the most sustainable exploitation activity possible.

All this with the aim of effectively achieving the ultimate goal of the development of the battery industry: to promote a sustainable energy model that really leads to an effective energy transition and a paradigm shift with respect to the current situation. It will depend on this that Spain and its different Communities can effectively become a reference in one of the industries of the future.