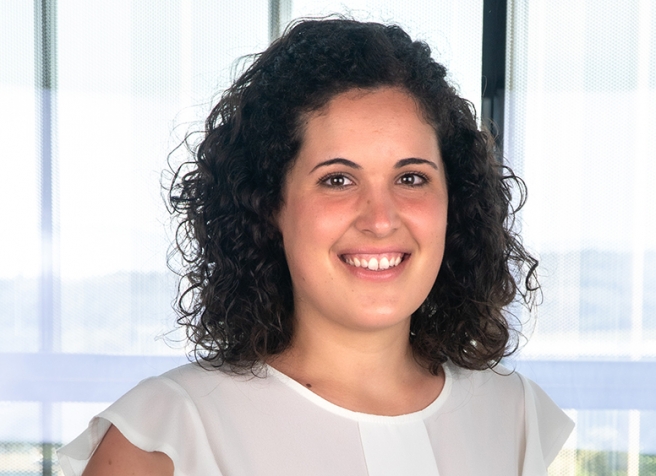 In 2015 she joined Urbaser (Araia) as an undergraduate student for the period of 5 months. During those months, she was involved in the physicochemical characterization of industrial waste-oil by gas chromatography measurements. At the same time she also worked in the management of the waste-oil suppliers.

In the summer of 2015 she joined for the first time CICenergiGUNE as a summer student for a period of 2 months. During this time, she synthesized and characterized Na2M2(SO4)3 compounds as positive electrode active materials for Na-ion Batteries.

After that she obtained a Postgraduate grant from the UPV/EHU to continue her studies. In 2016, she obtained her Master in Chemical Engineering, while she joined again CICenergiGUNE to carry out her Master’s Thesis. This time she joined the new hybrid supercapacitors research line.

Motivated by this excellent experience and thanks to a FPU pre-doctoral grant awarded by the Spanish Government, María carried out her PhD thesis at CIC energiGUNE in the research line of Electrochemical Capacitors. Her PhD research was focused from the preparation of new materials and their physicochemical and electrochemical characterization to the development and optimization of final metal ion capacitors. In the frame of her PhD, she visited the group of Prof. Andrea Balducci for 4 months in the Friedrich Schiller University of Jena (Germany) in order to work on the search of alternative electrolytes for lithium and sodium ion capacitors. Later, she also joined the research group of Dr. Sonia Dsoke from Karlsruhe Institute of Technology (KIT) to continue the research of electrolytes, that time focusing on potassium ion technology. At the same time she also participated on the lectures of Environmental Engineering and Experimentation on Chemical Engineering from the Bachelor’s degree of Chemical Engineering from the UPV/EHU in Leioa. At the end of 2019 she obtained her PhD degree by the University of the Basque Country with International and Cum Laude mentions.

Then she joined CIDETEC-Energy Storage as a Junior Researcher for the period of 6 months. There she participated in several Industrial Projects related to the development of different Energy Storage devices, being Project Leader of one of them.

In 2020 she re-joined CIC energiGUNE as a Postodoctoral Researcher in the Prototyping group. Her research interest is mainly focused on the development of metal ion capacitors.