Gisbert acknowledged the commitment of the entire CIC energiGUNE team, which in a very short period of time has made this centre a world reference in the field of energy storage

Nuria Gisbert, Director General of CIC energiGUNE, has been awarded the AMPEA “Women in Science” Prize, an award category introduced this year by the Álava Association of Professional and Business Women, in collaboration with the Álava Technology Park, to promote and disseminate the role of women in this field. The award ceremony took place on Tuesday, 3 December, at the Europa Conference Centre in Vitoria-Gasteiz.

The jury has taken into account Gisbert´s professional career as head of a Research Centre which, since it first opened, has stood out for maintaining a balance between men and women in the make-up of its staff, without this situation ever having been the result of a specific policy in this field but rather of the assessment of the merits of each professional. It should be noted that this parity also extends to the Management Committee, a situation which is still quite unusual even today in the sector.

CIC energiGUNE is a centre where cultural and gender diversity prevails, with 50% of its researchers from outside the Basque Country and comprising 14 different nationalities. Currently, half of the 100+ professionals at the Cooperative Research Centre, located in the Álava Technology Park, are women. As the Director General of CIC energiGUNE explains: "We encourage diversity as a way of enriching research, and we are proud to be the first BRTA Cooperative Research Centre to have a woman as Scientific Director, namely Ikerbasque Professor Elena Palomo, and Pilar González, of Iberdrola, as our President". 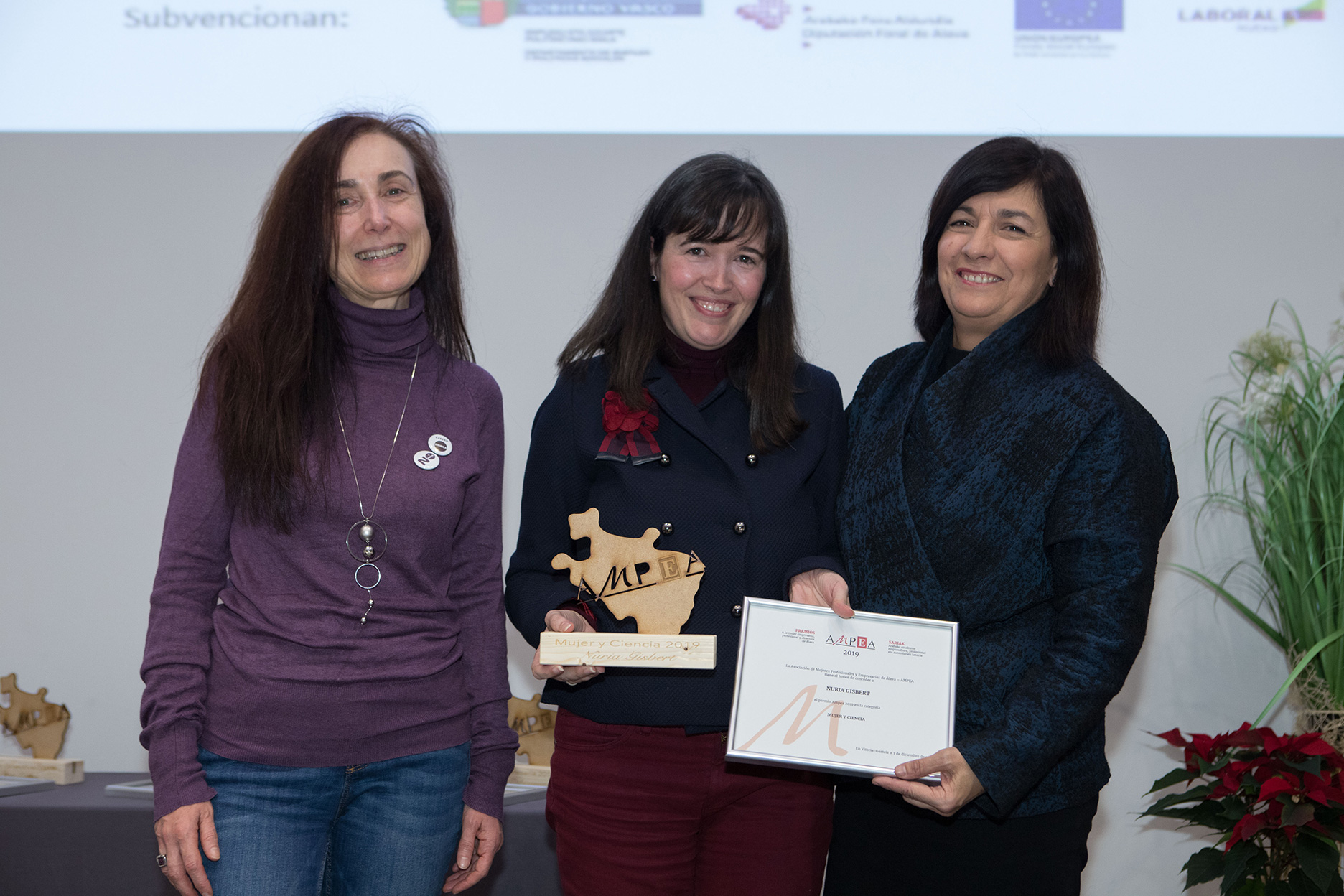 This commitment is in line with the strategy established by the Basque Government and the Ikerbasque Foundation to promote comprehensive professional development and access for women to all areas of science, technology and research. In this sense, CIC energiGUNE is an organisation ahead of its time, as the gender gap in its workforce is considerably below the average for all the country´s research organisations.

At the awards ceremony, Gisbert was keen to acknowledge the commitment and effort of all her colleagues at CIC energiGUNE in making the Centre, in a very short period of time, a world reference in energy storage. She especially thanked the Management Team - consisting of four men and four women - for the support provided since her arrival and for their involvement in the project, and highlighted the invaluable support provided by the Provincial Government of Álava over all these years, with particular reference to Pilar García de Salazar, Head of the Area for Economic Development and Territorial Balance of the Provincial Government, for her closeness and commitment to CIC energiGUNE.

The Director General of CIC energiGUNE also thanked the Minister, Arantxa Tapia, for "the visionary and sustained commitment of the Ministry of Economic Development and Infrastructures of the Basque Government to creating a centre of international renown in energy storage". Similarly, Gisbert thanked Itziar Epalza, Director of the Basque Country Network of Technology Parks, for promoting this new AMPEA award category, and for her unwavering support over time for the CIC. "Looking back, it has been the commitment of many women that has helped us get here, and that has made it possible for me to represent the organisation I lead today. Many thanks to all of them: without your help, this would not have been possible", Gisbert concluded.

With a PhD in Business Management and Industrial Engineering, Nuria Gisbert has almost 20 years of experience in the energy sector. Prior to becoming Director General of CIC energiGUNE, she had been Director General of CIC microGUNE, after previously holding several senior positions at the Incoesa corporation. She is also a board member of Innobasque, on the Governance Board of the Official Association of Industrial Engineers of Bizkaia, member of the Scientific Advisory Committee of the Basque Council of Science, Technology and Innovation, and President of Bcare, the first spin-off set up by CIC energiGUNE.