The mayor, Gorka Urtaran, and the general manager, Nuria Gisbert, sign an agreement to carry out initiatives to promote energy sustainability.

The City Council of Vitoria-Gasteiz and the Fundación Centro de Investigación Cooperativa de Energías Alternativas -CIC energiGUNE Fundazioa- have today signed a collaboration agreement to work together on initiatives to promote energy sustainability. The Mayor, Gorka Urtaran, and the general manager, Nuria Gisbert, anticipated that one of the first works derived from the agreement will be developing a pilot study to give a second life to the batteries of municipal electric vehicles and use them in the lighting of public space.

CIC energiGUNE is the research center for the storage of electrochemical and thermal energy, member of the Basque Research & Technology Alliance - BRTA. The center, which depends on the Department of Economic Development, Sustainability and Environment of the Basque Government, is an international reference and has the support of the Provincial Council of Alava and the Basque Energy Agency, as well as the leading companies in the energy and storage sector in the Basque Country. The entity led by Nuria Gisbert has been developing various actions to promote energy storage.

For its part, in 2008, the City Council signed its adhesion to the Covenant of Mayors, committing itself to developing a sustainable energy plan. This year, it has renewed its commitment to adhesion, assuming its objectives for 2030. A few months ago, it presented the "Vitoria-Gasteiz Green Deal" at the COP25 World Climate Summit, a plan based on the green economy, social cohesion, and natural environment protection. 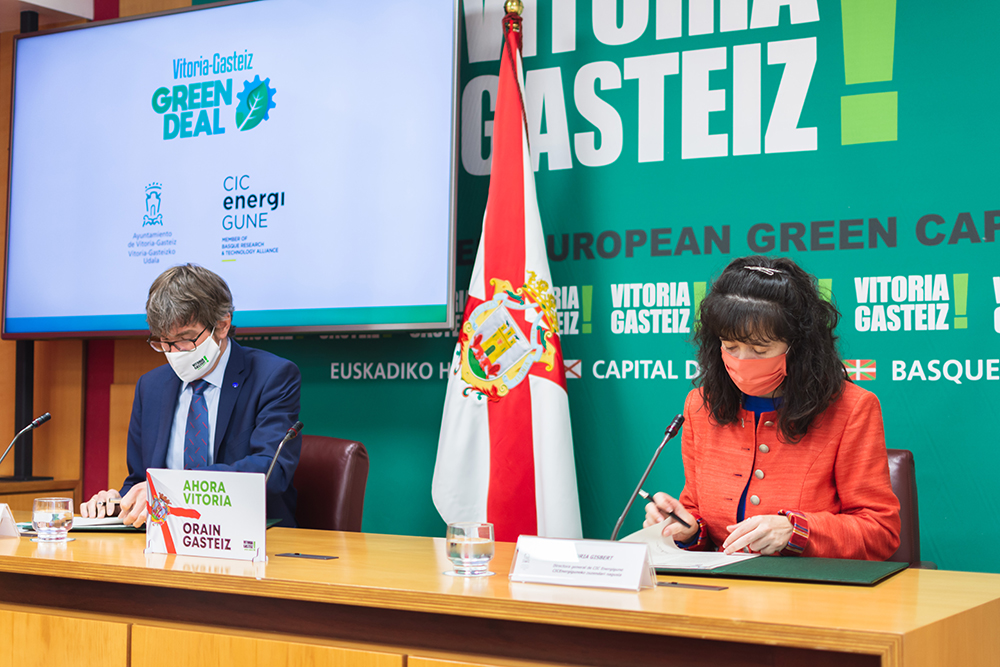 The Mayor highlighted that one of the "Vitoria-Gasteiz Green Deal" goals is to "capture and implement solutions and initiatives to meet the challenges facing the planet and that can be developed at a municipal level, energy sustainability being one of them". Likewise, Gorka Urtaran has recalled that in the municipal mandate plan for the period 2019-2023, "have special relevance initiatives for energy transition, such as the use of mobility model based on the use of sustainable energy".

For her part, the general manager of CIC energiGUNE has highlighted the importance of this agreement in order to promote the adoption of energy storage technologies that represent an improvement in the efficient use of energy in Vitoria-Gasteiz. "From CIC energiGUNE, we also bet on sustainability, and we put part of our research efforts in recycling and second life of batteries, an aspect that will be key in the consumption decisions of citizens in the coming years".

Given the existence of shared objectives, both institutions have decided to sign an agreement through which CIC energiGUNE will advise and collaborate with the City Council. Specifically, it will carry out a pilot study to explore a second life for electric vehicles´ batteries. Both in the case of transport vehicles from TUVISA, as well as cleaning and others, will try that their batteries, once their lifespan, can be used, for example, in the lighting of specific points of urban space. It will also carry out feasibility studies in the field of electrification of heat demand in municipal buildings. The agreement will also promote awareness and dissemination days, always with a view of the energy transition.