The idea behind thermochemical water splitting cycles (TWSCs) is simple: use a closed loop of two or more chemical reactions to drive the decomposition of water and produce hydrogen. The energy input may come from concentrated solar heat or industrial waste heat, making TWSCs a viable solution for green hydrogen production.

However, both scientific and technological challenges are still to be solved to make thermochemical cycles competitive.

The research performed at CIC energiGUNE aims to develop decentralized hydrogen production modules to be integrated, for example, in industrial environments with waste heat as a heat source.

But let us start from the basics.

Water thermolysis is like water electrolysis but using heat instead of electricity.

We all know that the chemical formula of water is H2O, right? Well, in principle, if we simply heat up enough, we can split water into hydrogen (H2) and oxygen (O2). However, such direct water thermolysis requires temperatures >2500ºC, which makes it unsuitable for real-life applications.

This main problem is solved using a certain number of chemical reactions to divide the water decompositions into more steps. The reactants are regenerated in a closed loop while the overall chemical reaction remains that of direct water thermolysis. The result is what is commonly called as thermochemical water splitting cycle (TWSC). Thanks to TWSCs operating temperature decreases, and hydrogen and oxygen are produced in different steps, which eliminates the need for high-temperature gas separation and reduces the risk of accidents.

This trick is anything but new.

The idea behind TWSCs dates to 1966. The interest in this technology then increased during the 70´s and the 80´s due to the oil crisis. At that time, a huge amount of TWSCs was proposed with the main idea of producing hydrogen from nuclear energy.

Since their conception, TWSCs have been considered the natural alternative to water electrolysis for large-scale H2 production. One of the main advantages presented by TWCSs is that they are catalyst-free and do not rely on expensive and rare elements.

The research on TWSCs boomed at the beginning of the 21st century when climate change awareness grew rapidly among the scientific community. Nowadays, the technological advances achieved in solar energy collectors and concentrators make coupling TWSCs with concentrated solar energy particularly interesting for green hydrogen production. Moreover, the utilization of waste heat has great potential for decentralized hydrogen production in proximity of industries or power plants. Creating TWSCs modules could help to decrease the overall CO2 footprint of the industrial process and find application in smart grids, together with electrolyzes and thermal energy storage (TES) units. 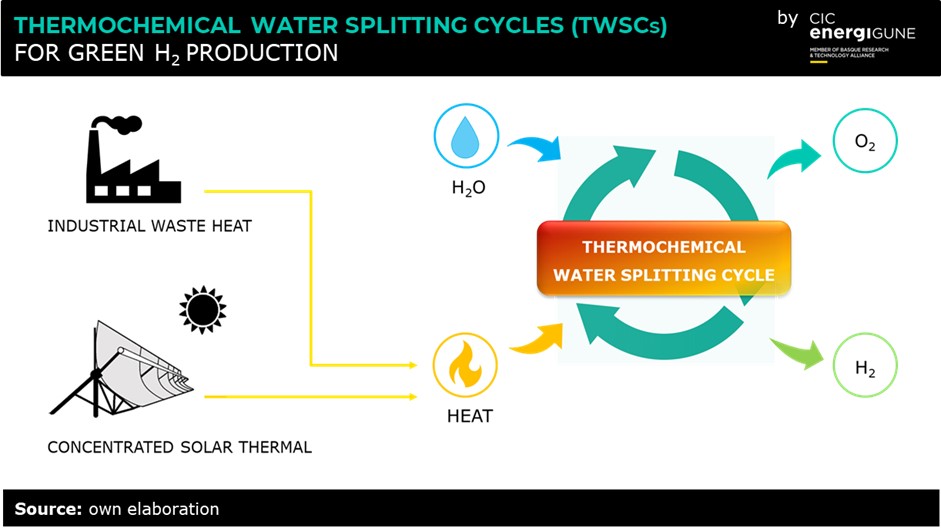 Many candidates for a (still) green technology

More than 300 thermochemical water splitting cycles have been proposed, but only a few have been extensively investigated. Moreover, despite the 50 years-long history and the high potential, the technology readiness level (TRL) of TWSCs is still quite low, especially if compared to electrolyzes.

The thermochemical cycles can involve 2 to 5-6 steps with operating temperatures between 500 ºC and 2000 ºC. In general, the lower the number of steps, the higher the required temperature and vice versa.

The multistep cycles (nº steps ≥ 3) are the oldest and the more studied. This is due to their relatively low operating temperatures (T < 900 ºC), which made them attractive when the research on TWSCs was mainly focused on the nuclear sector. 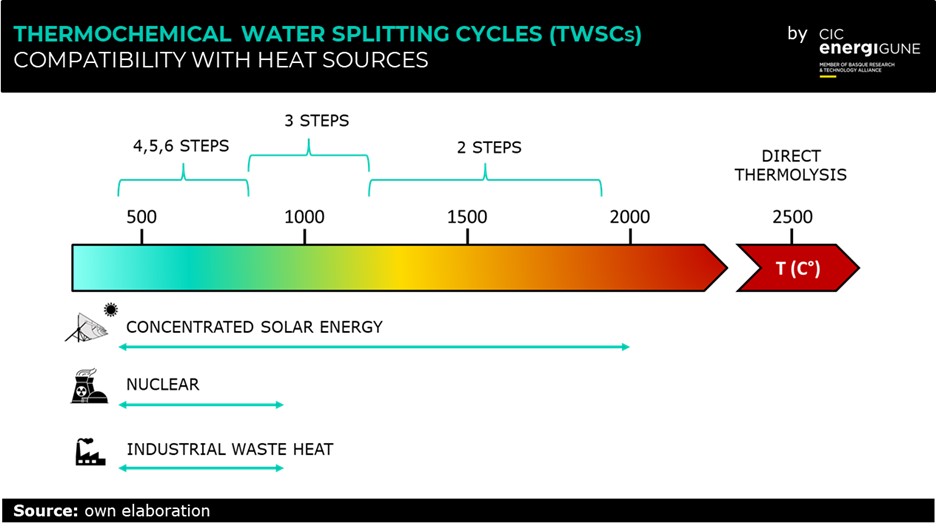 A classic example is the S-I (sulfur-iodine) cycle introduced by General Atomics (GA) in 1974, which has a peak operating temperature of 850ºC. Other famous multistep cycles are the Cu-Cl (copper-chlorine), the Fe-Cl (iron-chlorine), and the Mg-Cl (magnesium-chlorine). Many of these cycles are also available as hybrid thermochemical cycles, meaning that they include at least one electrolytic step. This enables to reduce the temperature but adds further complexity to the overall process.

Multistep cycles could use both concentrated solar energy and industrial waste heat to produce green hydrogen on large scales. For instance, preliminary estimations of the S-I cycle coupled with concentrated solar energy suggested efficiencies of 42%, 52% and 60%, with peak temperatures of 827 ºC, 900 ºC and 1000 ºC, respectively. However, the main drawback of all these multistep cycles is that they involve highly corrosive (e.g. hot H2SO4 and HCl) or hazardous (Cl2) reactants and/or products that may compromise viable commercial process implementation.

On the other hand, two-step TWSCs do not present these problems as they only rely on metal oxides. The general mechanism is straightforward. During a first thermal reduction step, the metal oxide is heated until the metal is reduced; a lower-valence oxide is formed, and molecular oxygen is released from the crystal lattice. The system is then cooled and reacted with water vapor at a lower temperature; during this water-splitting step, the metal gets oxidized to regenerate the initial high-valence oxide, while H2 is produced.

Several metal oxides involving volatile (e.g. ZnO/Zn, SnO2/SnO) or non-volatile redox pairs (e.g. Fe3O4/FeO, MnO/Mn3O4, mixed spinel ferrites and perovskites) have been experimentally investigated. Some of them, especially the CeO2 cycle, have also been tested on small-scale solar concentrators. However, the technology readiness of two-step cycles is lower compared to the older multistep ones.

One of the main obstacles is that the reduction step typically requires very high temperatures (typically above 1400 ºC) that can be achieved only by direct irradiation of high fluxes of concentrated solar radiation with the consequent limitation related to the production sites. Despite high efficiency up to 60 % are predicted, the high energy requirement and the low loading of active material practically lead to poor efficiencies and high hydrogen cost. Moreover, the high temperatures negatively affect the long-term materials performances and pose significant challenges in the realization of thermochemical reactors. 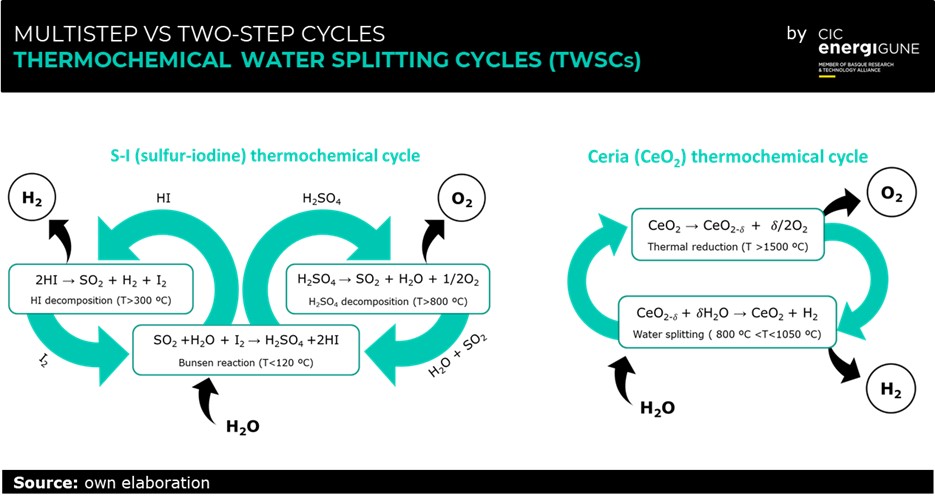 The Solid-state Chemical Reactions group of CIC energiGUNE is working on metal oxide-based thermochemical cycles that can operate at a temperature as low as possible, approaching 500 ºC. The final goal is the development of decentralized hydrogen production modules to be integrated, for example, in industrial environments with waste heat as a heat source.

The research activity focuses on:

In conclusion, green hydrogen is expected to have a key role in the transition towards a carbon-neutral society during the next decades. However, nowadays it represents only around 1% of the world’s total energy production, while around 95% is still derived from fossil fuels. So here is the big deal: how to make renewable H2 economically competitive and fully sustainable? Like most of the complex problems, also this one has no simple solution. Rather, the answer is likely to come from a combination of different technologies, which may be more or less suitable depending on the specific contexts.

Two-step metal-oxides-based TWSCs represent a still green and unexplored technology that can contribute to decrease the cost of green hydrogen production by taking advantage of industrial waste heat and waste materials.

For sure, there is still room for significant improvements, and CIC energiGUNE is committed to this cause. 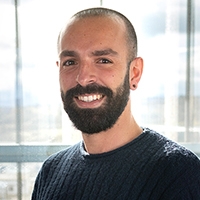