Electrolyzers: a manufacturing industry that everyone wants to lead

Hydrogen is one of the industries with the greatest potential for the future of the global energy sector, as we have already seen in different posts on our blog. Because of this, the sub-industries associated with this energy vector are gaining more and more importance and attention, as it is essential for the proper deployment of the large H2 industry.

One of the best examples of this is the manufacturing industry associated with the production of electrolyzers, which are the key devices for achieving hydrogen production from what is known as electrolysis.

This chemical process separates the hydrogen and oxygen molecules that make up water through renewable electricity (or, at least, without carbon emissions). Thanks to this, the so-called "green hydrogen" is obtained, the only type of H2  that does not emit CO2 into the atmosphere during the production process.

Due to such characteristics and the importance of developing a "green" hydrogen industry, the manufacture of electrolyzers is gaining more and more prominence. Not only because the subsequent deployment of H2-based applications will depend on its technological advances, but also because the different countries and regions of the world are seeking to dominate this stage of the hydrogen value chain to ensure their future supply and independence in energy terms.

For example, Europe, as well as other examples such as batteries, is working hard to develop its own industrial network around hydrogen.

Not surprisingly, according to estimates by the Clean Hydrogen Partnership (the main EU public-private initiative related to the H2industry), it is expected that by 2050 the demand for hydrogen on the continent could exceed 2,250 TWh in an "ambitious" scenario, in which the continent has been able to boost the different stages of the hydrogen value chain in its territory, including the capacity to produce it. 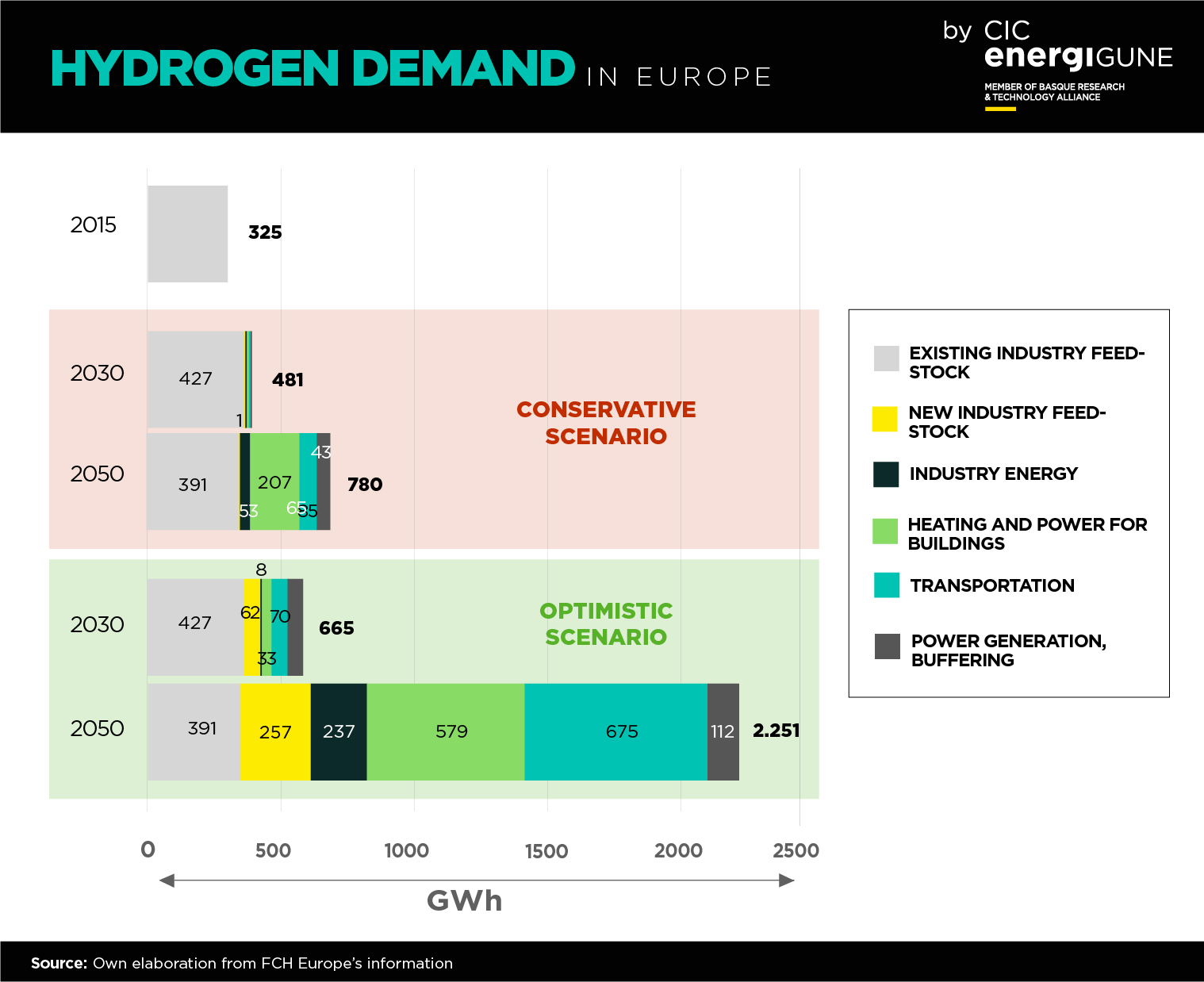 To this end, the European Commission has already announced, through its strategic hydrogen roadmap, the intention to mobilize almost 500,000 million euros of public-private financing in this decade. This investment will be earmarked both for the development of initiatives associated with the research and development of technologies (including electrolyzers) and incentives for the installation of green hydrogen production projects.

This shows the importance that Europe is placing on building a strong hydrogen industry on the basis of its own production network. But what are the activities and phases that make up the electrolyzer manufacturing industry?

The aforementioned investments and technological developments are largely aimed at promoting the start-up of the electrolyzer production process. This goal includes the two technological alternatives that are currently the most developed and, in fact, are already in the commercialization stages: alkaline electrolyzers and PEM electrolyzers.

Each of these routes has different advantages in terms of efficiency, flexibility, lifetime or purity of the final H2 produced. However, the manufacturing process for both types is very similar and can be divided into three main phases.

First, there is cell manufacturing. The cell, as with batteries, is the "core" of the electrolyzer; the means through which the electrochemical process that allows the production of H2 takes place.

These cells consist of two electrodes (cathode and anode) that require the addition of either a liquid electrolyte or a solid electrolyte membrane, depending on the supplier and the technology used. Other components are also necessary for proper operation, such as, for example, two porous layers that allow the transport of reagents and the elimination of products, or bipolar plates that provide mechanical support and distribute the flow.

Secondly, once the cells have been produced, the so-called stacks are developed. In these stacks, there are multiple cells connected in series, allowing them to be integrated with each other and thus achieving a device that consolidates the electrolysis capacity of the cells in a single element. To produce them, spacers (to isolate the opposing electrodes), gaskets, frames and plates (to achieve mechanical stability and prevent fluid leakage) are used.

Thirdly, we find the electrolyzer itself, where the integration of stacks with the rest of the equipment necessary for hydrogen production, such as cooling devices, hydrogen processing, water and electricity supply and gas outlet, is carried out.

Once these elements have been integrated into a single unit, the complete system will be available for electrolysis (either alkaline or PEM) and H2 production.

Who are the different manufacturers and what are their technological bets?

Given the industry´s prospects, more and more manufacturers are trying to position themselves in the market in order to gain prominence in this large manufacturing industry.

If we analyze the main companies that are currently leading the industry, we can again see that they are mainly concentrated in the same regions and countries that are strongly betting on other industries with a great future such as batteries: Europe, North America (with the USA at the forefront) and Asia (thanks to China and Japan). 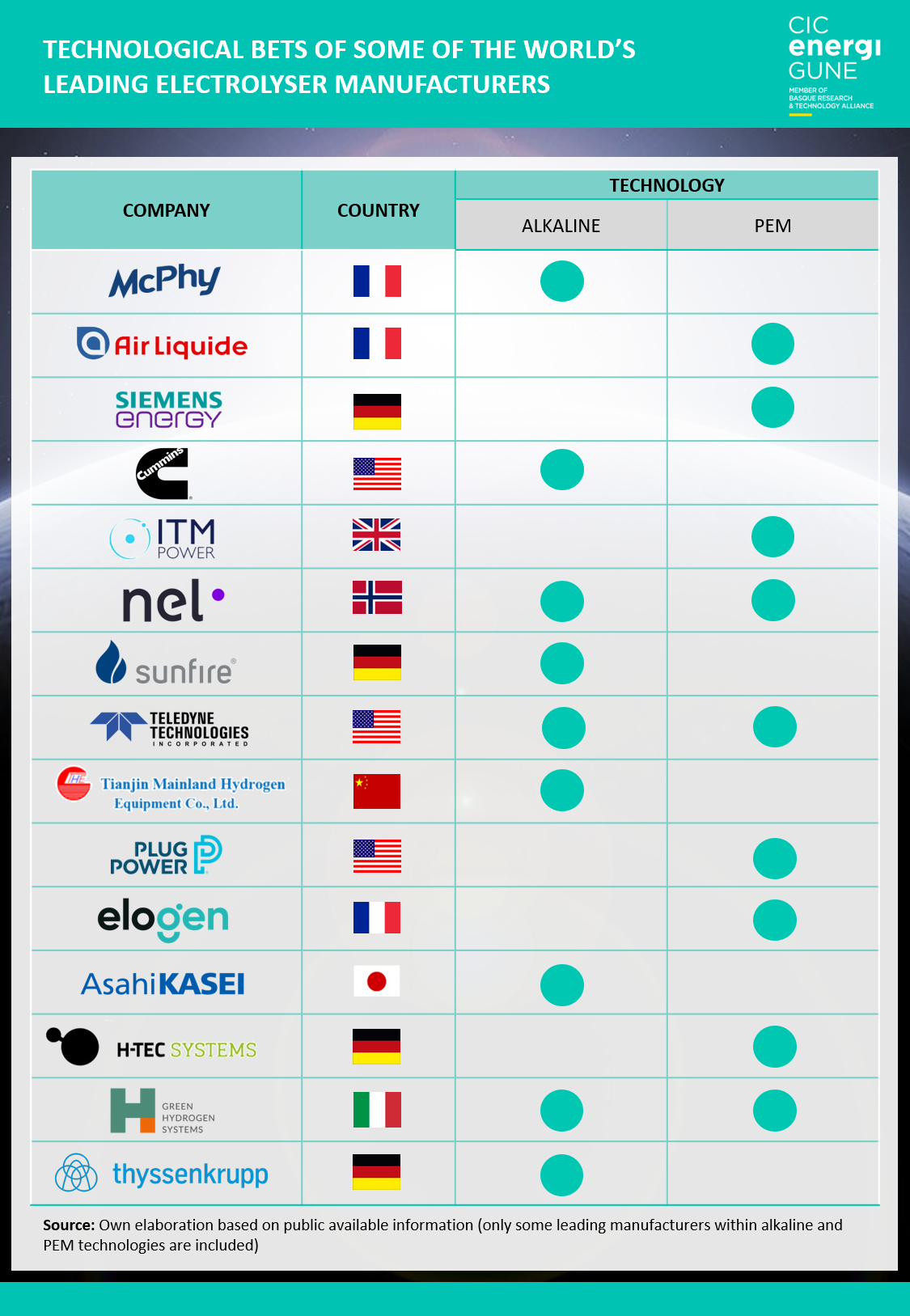 As can be seen, we are talking about a market that combines large manufacturing companies with extensive experience in the energy sector with new players (many of them start-ups) that aim, with their technological proposal, to revolutionize the market.

However, if there is one thing they all have in common, it is their aspiration to position themselves as future benchmarks and leaders in an industry that is expected to have a market value of more than 1,300 million euros worldwide by 2028. Hence the struggle and race that is expected from all of them in the short-medium term and that will surely bring with it the development of new advances that will further strengthen the commitment to this industry in the long term.