The metal-air research line of CIC energiGUNE -in the context of the BioAirBat project- is exploring small biomolecule/graphene hybrids as efficient electrocatalysts for the production of clean and sustainable energy.

Lithium-ion batteries dominate the current battery market due to their high energy density (100-265 Wh kg-1), long cycle life (2000-3000 cycles) and cost. However, they present some limitations when covering the future energy demands for grid support, consumer electronics and electric vehicles.

Metal-air batteries are still underdeveloped devices which could effectively replace petroleum-based fuels due to their extremely high theoretical capacity (1000-3500 Wh kg-1). Such high capacities can be achieved by using oxygen gas and sodium or zinc metals, which are sustainable and cheap materials not classified as critical raw materials associated with future supply risk which is a key parameter to develop feasible alternatives to petroleum-based economy.

On the other hand, zinc-air batteries are a century old technology which came back to the limelight thanks to the development new electrocatalysts enabling their rechargeability. Zinc metal has not the natural abundance as sodium, but it enables the use of environmentally friendly and cheap water-based electrolytes.

Metal-air batteries are a very special batteries as they “breathe “in the same way as cells in living organisms, they use oxygen to generate energy. The cathode “inhales” oxygen during discharge to release energy by electrochemical reduction of oxygen (oxygen reduction reaction, ORR). The reduced oxygen species combine with the metal ions produced at the metallic anode to form metal oxides, either on the electrolyte or the cathode surface. During charge, the metal oxides are decomposed back to “exhale” molecular oxygen by an oxygen evolution reaction (OER). 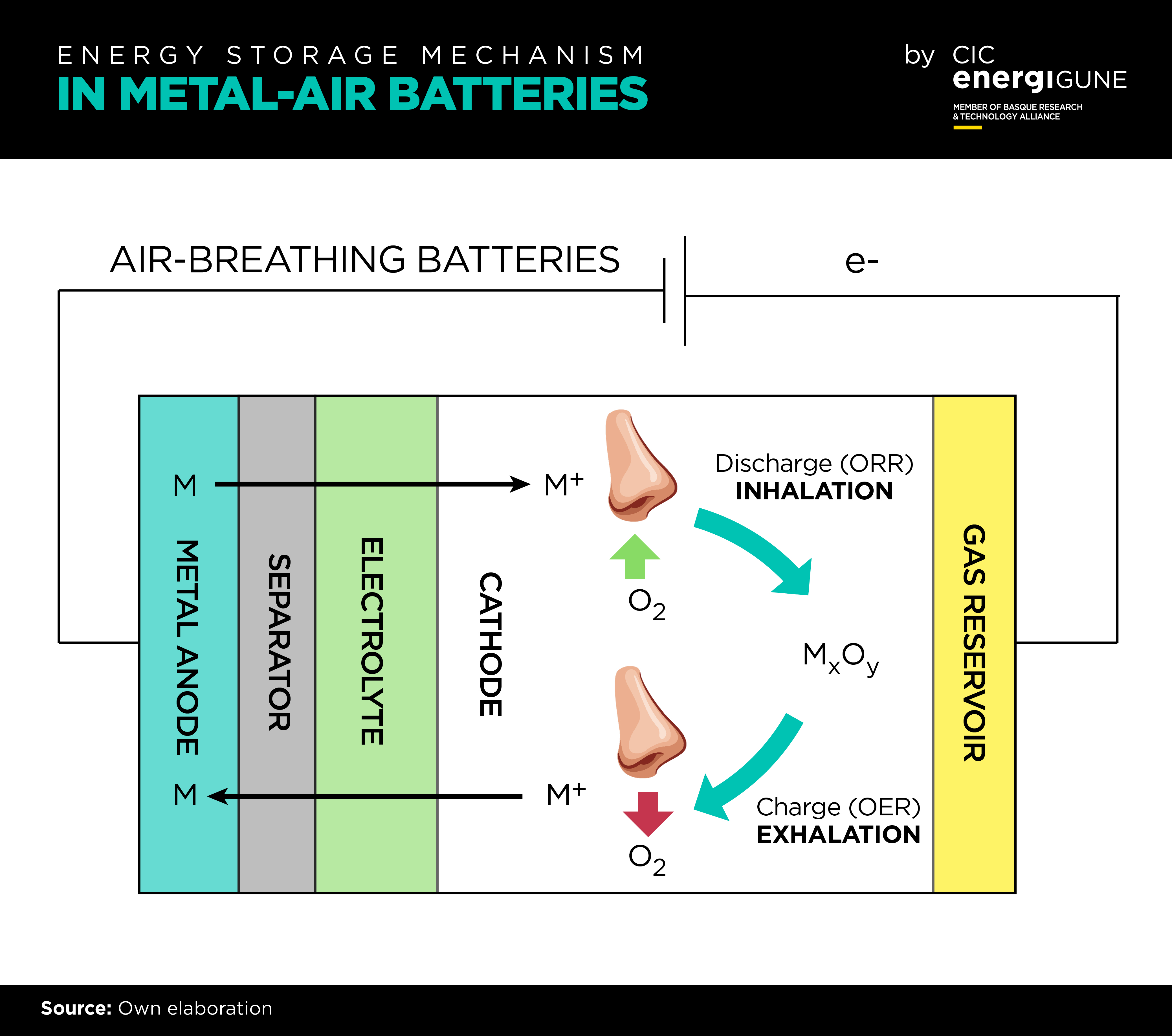 Up to date, the major challenge of metal-air batteries to replace lithium-ion batteries is the still limited rechargeability. In contrast to insertion in metal-ion batteries, the chemical conversion occurring in metal-air batteries is a more energetic storage mechanism but from a kinetical point of view is much more hindered, leading to high cycling overpotential and premature death of the battery. In this context, finding efficient and sustainable electrocatalysts for the ORR and the OER have been intense research topic in the last decade.

Biomimetic synthetic molecules are an excellent choice for the creation of new materials with similar or better properties of naturally existing biological materials, opening a new avenue for the development of efficient energy storage systems. CICenergiGUNE has identified that the complex solution-based oxygen chemistry, which limits the efficiency and performance of metal-air batteries, is very similar to those occurring in living cells during respiration. 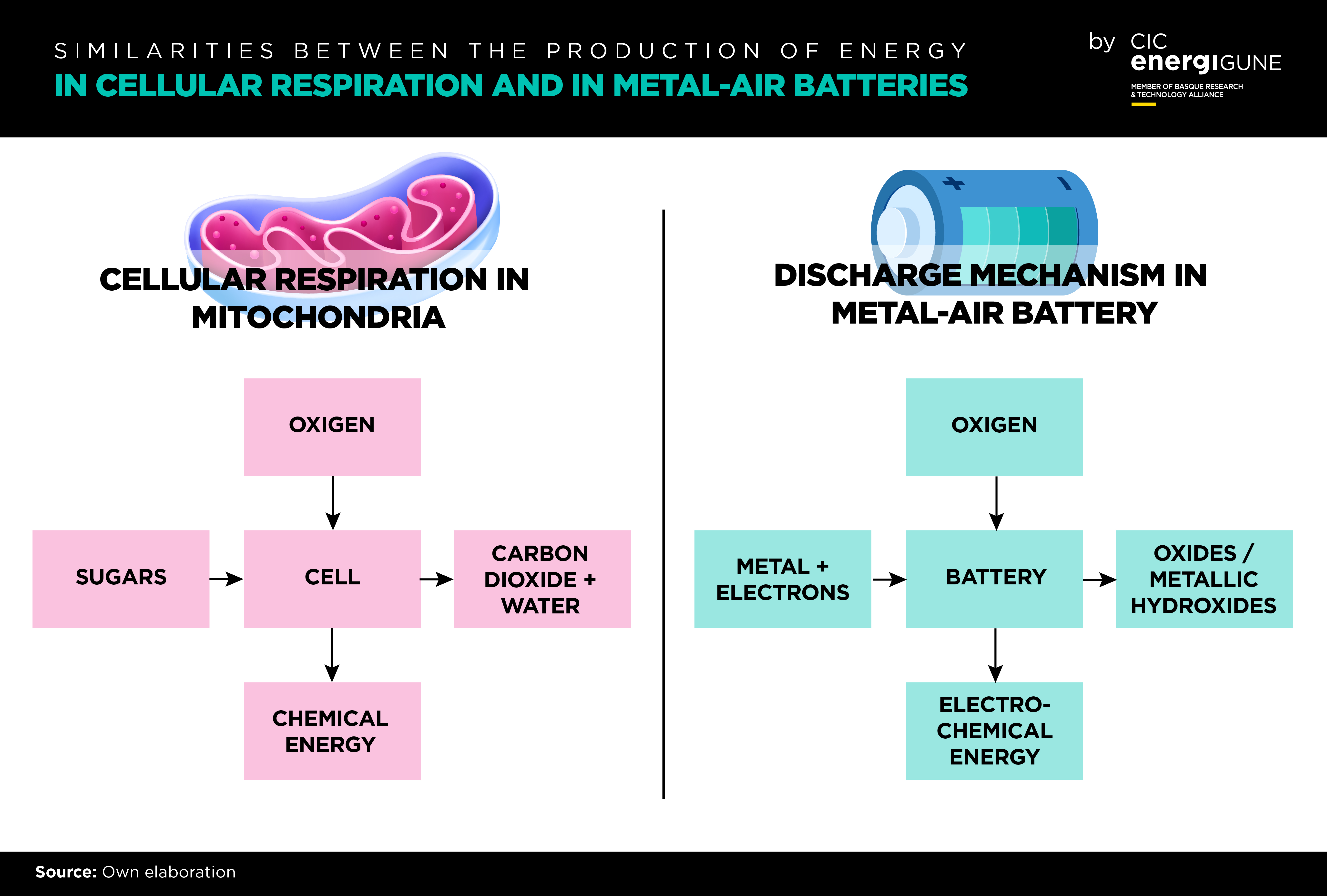 More specifically, metalorganic macrocycles are “natural catalysts” involved in oxygen-converting biochemical reactions on human metabolism. As an example, Cu-porphyrins and Fe-porphyrins (heme group) are redox active centers which catalyze the reduction of molecular oxygen to water and act as electron shuttlers in mitochondria. Heme group is also the active center in hemoglobin, which is the principal oxygen-carrier in animals.

Another good example of efficient kinetics in living cells are nucleotides. These small biomolecules (consisting of a nitrogenous heterocyclic nucleobase, a pentose sugar, and a phosphate group) act as enzyme cofactors by undergoing reversible oxidation/reduction reactions in the mitochondrial electron transfer chain by releasing or withdrawing electrons, respectively. Because of such enhanced redox activity and oxygen binding capacity this type of small biomolecules, naturally present in animal metabolism, has been already applied to hydrogen production, solar cells and fuel cells but are yet to be implemented in metal-air batteries. 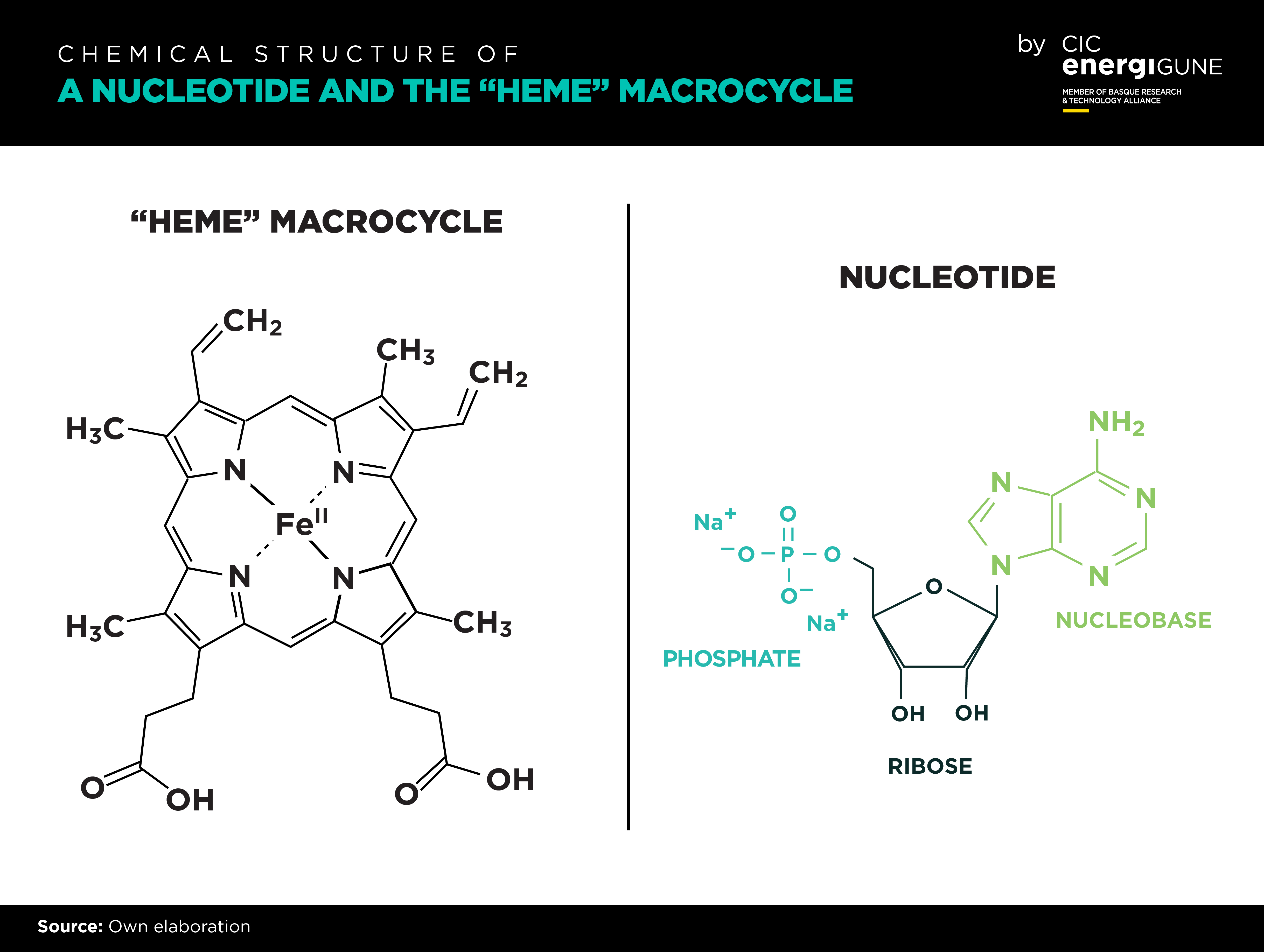 In the context of the national funded project BioAirBat  experimental and computational methodologies are being combined for the screening of molecules existing in nature and the discovery and design of new biomolecules with improved catalytic properties. However, improve both the electronic conductivity and stability of these molecules is mandatory for battery application.

The adsorption of the electrocatalysts on a large and conductive surface such as graphene sheets can provide faster kinetics, where the electrons are readily shuttled to the redox active centers in biomolecules, enhancing the reversibility of the redox pairs. Target the active sites on the complex structure of biomolecules, which are directly responsible for oxygen binding and ORR/OER catalysis, is also crucial to minimize parasitic reactions or the addition of dead volume in the battery devices (i.e. material which is not active and undergo to degradation worsening the electrochemical performance). Bearing this in mind, we are producing graphene by an environmentally friendly process (electrochemical exfoliation in water) to use it as support of small active parts of natural biomolecules for exploring their potential application for developing high-capacity, reversible and efficient batteries for the future.

Hence, coupling the advantages of high-energy metal-air batteries with the vast potential of electrocatalytic active biomolecules present in nature offers an interesting, sustainable and eco-friendly strategy to overcome the challenges of metal-air batteries. Understanding the links between the structure and the function of biomolecules by advance characterization techniques and computational studies will enable us to design of efficient electrocatalyst, which is crucial for the manufacture of advanced energy storage devices. 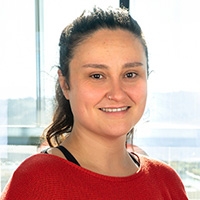