The coordination of the scholarships, aimed at master students in the fields of chemistry, physics or engineering, will be a responsibility of doctor Montse Casas-Cabanas, Scientific Coordinator of the Electrochemical Storage Area at CIC energiGUNE.

CIC energiGUNE, the Basque research center of reference in electrochemical and thermal energy storage and a member of the Basque Research & Technology Alliance-BRTA, has achieved to bring to Vitoria-Gasteiz 3 of the 50 “DESTINY” scholarships which, for the next 5 years, will train the next generation of battery scientists and engineers in the main centers of reference of the continent. The deadline for the submission of applications of these scholarships, financed by the EU through the Marie Sklodowska-Curie COFUND, is open until the 17th of January.

“It is an enormous recognition of the work we are carrying out with the research teams, since we are one of the centers that will receive more DESTINY doctorate students”, has assured Montse Casas-Cabanas, Scientific Coordinator of CIC energiGUNE and responsible for the coordination of the scholarships. “We are thrilled to start the training process of people who, undoubtedly, will be called upon to lead the next generation of researchers of batteries”.

The DESTINY program, linked to the ALISTORE network and the MESC+ Master –which CIC energiGUNE has managed to bring to the Basque Country for the first time this year–, will have two calls. The first one, for which the applications are now open until January 17th, will start in October 2021. The second one will start in October 2022 and applications will be open until January 2022. 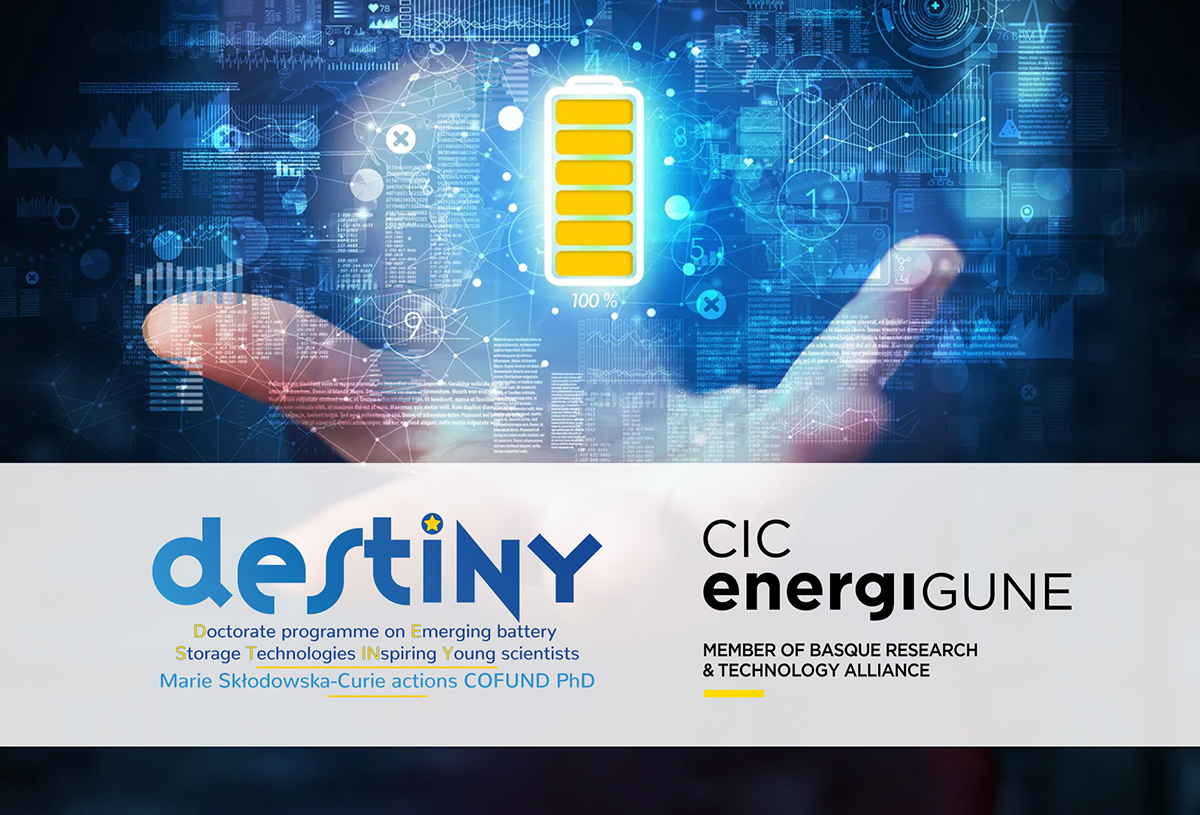 In particular, CIC energiGUNE takes part in three doctorate proposals in the first call of the scholarships, two of them exclusively and the other in collaboration with the ICMAB of Barcelona. The topics of the two direct scholarships are: “New (poli)anionic structures for electrolytes of Li-ion highly conductive solid polymers”, which will be supervised by Javier Carrasco and María Martínez; and “Rational design of improved mechanisms of Li transport in compound ceramic-polymer electrolytes by means of electrochemical characterizations and solid-state RMN”, supervised by Juan Miguel López del Amo y Fréderic Aguesse.

The scholarship in collaboration with the ICMAB-CSIC, supervised by Rosa Palacín and Montse Casas, will be focused on the Electrochemical and structural study of mixed positive electrode materials for Li-ion batteries of high power. In this case, the scholarship student will spend 50% of the time in each institution and will carry out a service commission of 3 months in the facilities of Umicore in order to perform electrochemical and physical specific tests on mixed electrodes and benefit from the exposure in an industrial setting.

The DESTINY program, coordinated by the CNRS in France, is made up of a consortium of 20 Universities, 6 Research Centers, 2 Research Networks, 2 Regions, 3 high-scale Facilities and 7 Companies of 11 European countries, most of them integrated in the European Network ALISTORE-ERI, which at the same time is the core of the MESC+ Erasmus Mundus Master. Its goal is to create a paradigm change in the research of batteries and cover the whole value chain of energy storage, by combining traditional methodologies with innovative ones and including communications, management, social and business skills, in order to train the next generation of scientists.

Financed by the European Union through a grant from the MSCA-COFUND, DESTINY will train 50 doctors in the next 5 years focusing on three main challenges: reinventing the discovery of the materials and the engineering of the batteries; developing smart batteries with new functionalities; and implementing new technologies in the industry. Moreover, DESTINY includes a wide range of trainings in transferable skills, such as personal effectiveness, performance in research and entrepreneurial spirit.