We have been hearing for several years how the electric vehicle is a key element in achieving the energy transition goals that have been set globally. The high volume that the mobility sector represents in terms of total annual emissions makes electromobility one of the main levers to achieving a more sustainable world in the future.

Despite being a key objective in the roadmaps of countries for several years, progress in this industry has been less fast than expected, largely due to the existing technological limitations that prevented a decisive commitment by major automakers.

However, new developments in technology (especially in batteries, which are at the core of electric vehicles) have led to a paradigm shift in the industry, which means that electromobility is on the verge of a real breakthrough.

The International Energy Agency itself foresees this trend change. In its latest report for 2021, the IEA sets two scenarios (one "conservative" and the other "optimistic", based on sustainable development objectives) that place annual electric vehicle sales at 25 million and 47 million respectively by 2030. This would mean, in turn, a 40% share of the total sales market in the most "cautious" scenario and more than 50% in the most "daring" one. 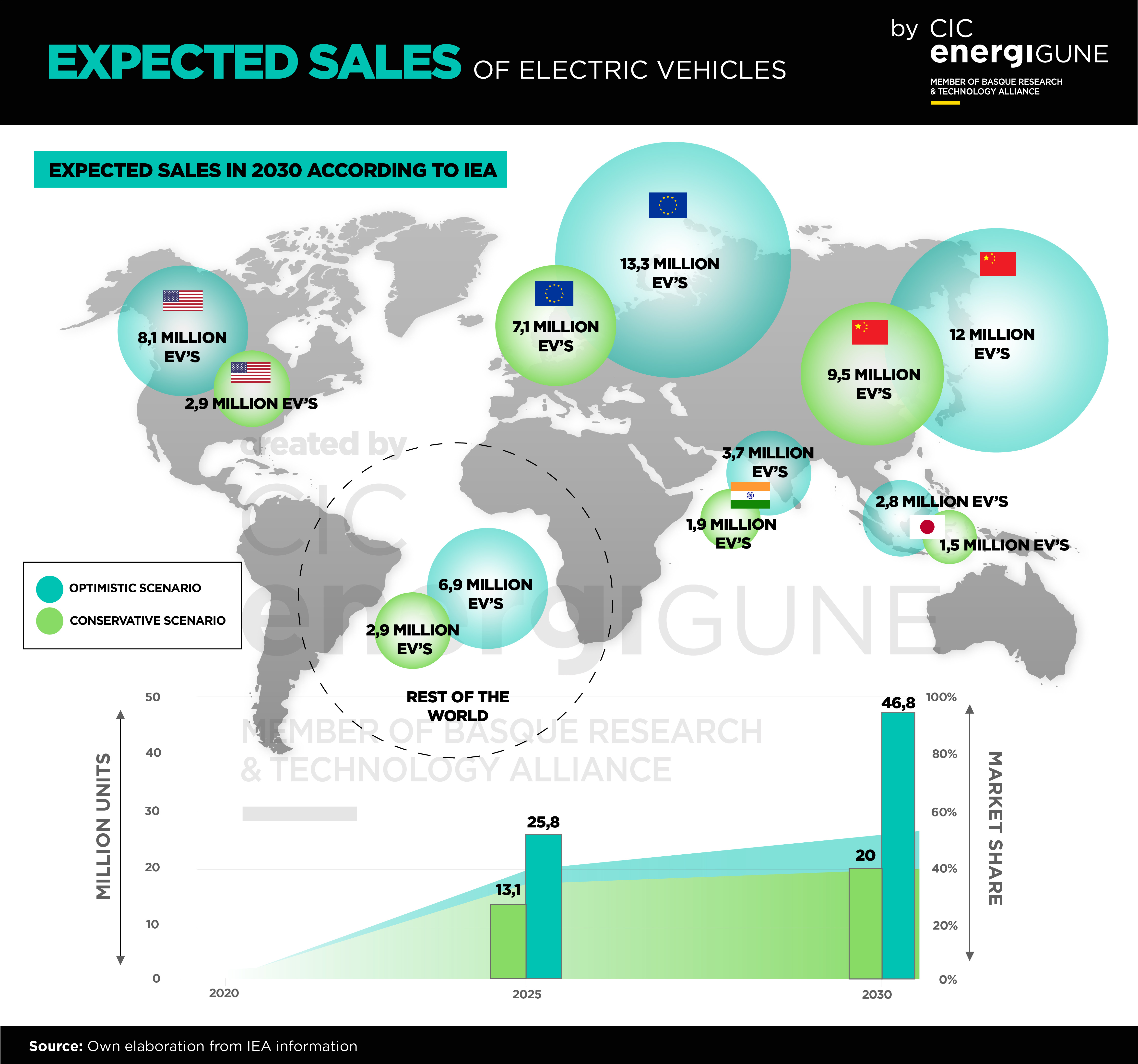 This "speeding up" of the industry is not only explained by technological development, but also by the incentive policies that many countries are adopting for the deployment of electric vehicles in the new context.

Many of these measures are also aimed at definitively banning the sale of 100% combustion vehicles within their borders in the medium term. Currently, more than 20 countries (including Spain) are already planning to prevent the sale of conventional models before 2040, with Norway being the most ambitious country with this goal, as it has set 2024 as the last year in which combustion cars will be sold in its territory. 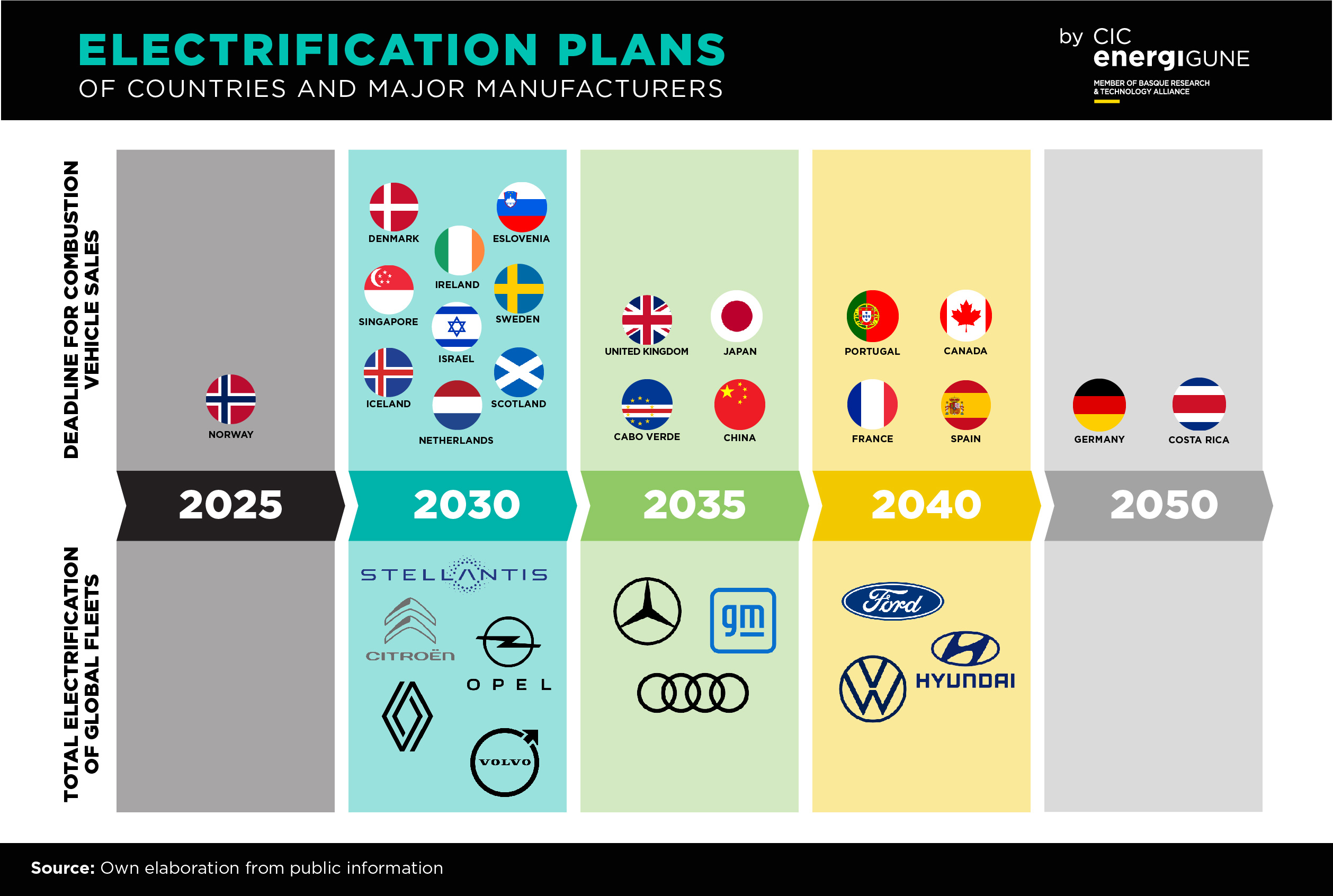 Due to this scenario, the major manufacturers have gone further in their electric vehicle launch programs, announcing, in almost all cases, ambitious plans for the total electrification of their fleets. In doing so, they are seeking to respond to the needs and demands expected from a market that is expected to exceed 320 million units in sales by 2040.

One of the most ambitious groups in this regard is the Stellantis Group, which has already announced its intention to sell only electric vehicles (at least in Europe) by 2030. This is the goal with at least two of its main brands, Citroën (which will start selling only electric cars from 2030) and Opel (which will do so even earlier, in 2028).

The third major brand that wants to match the end of this decade with the end of its combustion fleets is Volvo. The Swedish automotive jewel announced last year their goal of selling only electric vehicles from 2030 onwards, in order to lead the premium vehicle segment.

With somewhat more distant expectations, other companies have also announced their own deadlines for achieving full electrification of their fleets. This is the case of Mercedes (which will do so from 2035), Audi (also with a target date of 2035) or General Motors (also for the middle of the next decade).

Finally, another group of large companies have opted to delay this target until 2040. Such are the cases of Ford (although it does expect to achieve this goal in Europe by 2030), Volkswagen and Hyundai.

It should be noted that, within this wave of announcements, there is still some discordant voices that still do not dare to set a clear date for the electrification of their fleet. We are talking about BMW, which has already shown its doubts about the feasibility of the disappearance of the combustion engine in the second part of the next decade.

Solid-state batteries, essential for the feasibility of these plans

As we said before, together with the new regulations approved, the main reason for these great prospects for electromobility is due to the technological leap expected in the battery industry, which give "meaning" to the electric vehicle.

Specifically, the major breakthrough expected in the sector revolves around solid-state batteries, capable of meeting the needs and requirements of the automotive industry. Above all, thanks to four indispensable elements that represent a "revolution" compared to previous generations: 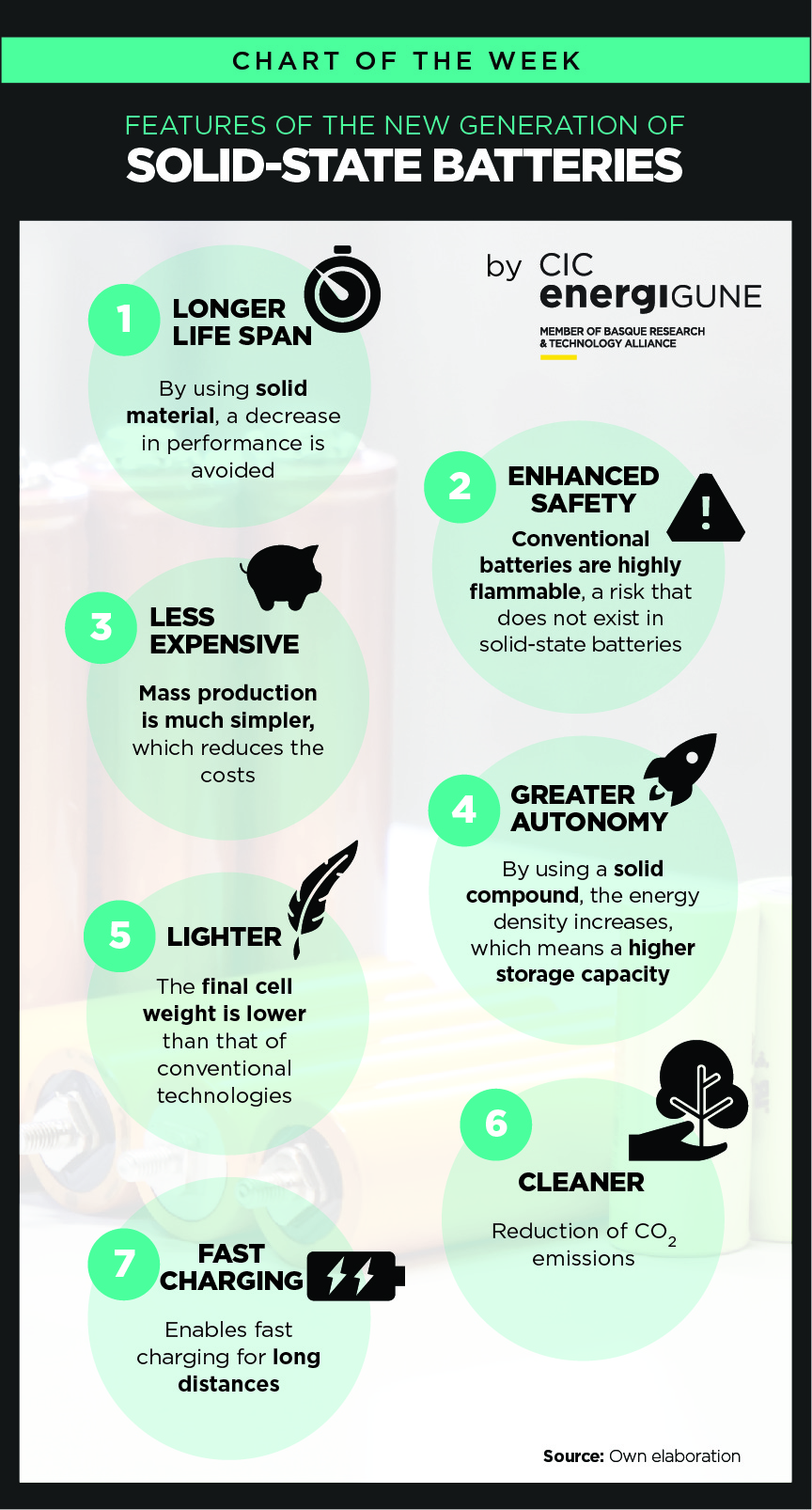 This technological proposal is the basis for the value and prospects that have emerged around solid-state batteries. Hence, the future depends on their development and industrialization, not only on the electric car industry, but also on other major applications that rely on cutting-edge energy storage solutions such as renewable energies or consumer electronics.

In this context, CIC energiGUNE plays a fundamental role thanks to its research line around this technology, which has positioned it as one of the leading entities in the research and development of this revolutionary solution.

Led by Michel Armand, considered, indeed, the "father" of solid state batteries, the center works with some of the main companies in the sector (such as Volkswagen, BMW or Toyota) and participates very actively in the large projects focused on solid state that are currently being deployed in Europe (such as the SUBLIME project or SAFELiMOVE). All this seeking to contribute to set the basis of these solutions from the knowledge and experience generated by the Center in its more than ten years of life.