Why is thermal management essential for the expansion of the electric car?

When designing a thermal management system in an electric vehicle where driving range is still a challenge, it is critical to consider not only the battery pack, discussed previously in the blog, but also other components such as the electric motor, the cabin temperature control system, the battery charging system and/or the power electronics.

This article aims to identify the thermal needs and features of each of these components, analyzing the current and future trends in the sector in terms of integrated thermal management in electric vehicles.

Along with the battery pack, the e-motor is one of the critical components in the electric vehicle. When it comes to thermal management of the e-motor, there is no need to warm-it-up, so all the solutions proposed at a commercial level are aimed at cooling its components. In fact, the cooling of the e-motor is of great importance because the efficiency of electro-mechanical conversion decreases significantly when the temperature rises.

With this in mind, within the electric vehicle, the e-motor has to be considered as a heat generating component; heat that can be captured and reused in other systems that demand it within the vehicle, with the ultimate goal of improving energy efficiency and extending the vehicle´s range.

Analyzing the solutions proposed by companies in the sector such as Volkswagen AG, YASA or Punch Powertrain NV, there are mainly two cooling alternatives for the e-motor. On the one hand, there is the use of an external cooling jacket and, on the other hand, internally through the rotor shaft. In both concepts, the proposal is to use liquids as heat transfer fluid (water, coolants or thermal oils). The selection of the cooling technology of the e-motor depends directly on its power, being necessary a combination of both in the case of high power motors. Regarding the selection of the fluid, this will depend on the fluid used in the rest of the vehicle components. In extreme cases, such as competition vehicles, the need to immerse the engine in oil is even considered as the only method to achieve the necessary cooling power.

Thermal comfort inside the cabin

A debate that arises in the electric vehicle with the elimination of the internal combustion engine (ICE) is, how to fulfill the thermal demand of the cabin to achieve passengers´ comfort. In ICE vehicles, this heat is "free" as it comes from engine inefficiencies and is generated at high rates, with the excess having to be evacuated to the outside. However, heat generation due to inefficiencies in the different components of the EV is much lower, and in many situations it is not enough to meet the total demand. In this sense, it is necessary to have an auxiliary system that, using the energy stored in the battery, generates the necessary heat.

In this context, the focus is on the most efficient way to satisfy the comfort of the vehicle passengers. Among the options considered are the use of air to heat the cabin as has traditionally been done, heating only surfaces such as the seats, the steering wheel, etc., or a combination of both.

Regarding the use of air, the simplest and most economical way is to use electric resistances. However, this alternative presents low efficiencies compared to the use of heat pumps (more expensive). The use of direct surface heating is seen as an alternative to optimize energy use and ensure thermal comfort by heating only those areas of the cabin where there are occupants.

It appears to be no consensus on a standard solution. Nowadays, the industry´s current thinking seems to be different for small vehicles and premium vehicles. The first ones, in which cost reduction is a priority, usually include an air-conditioning system based on air heated by resistances as standard and, optionally, offer a heat pump, with the aim of minimizing electricity consumption and, therefore, increasing the vehicle´s range. In premium vehicles, however, the standard solution tends to be a combination of heat pump (air) and surface heating (seats and steering wheel). 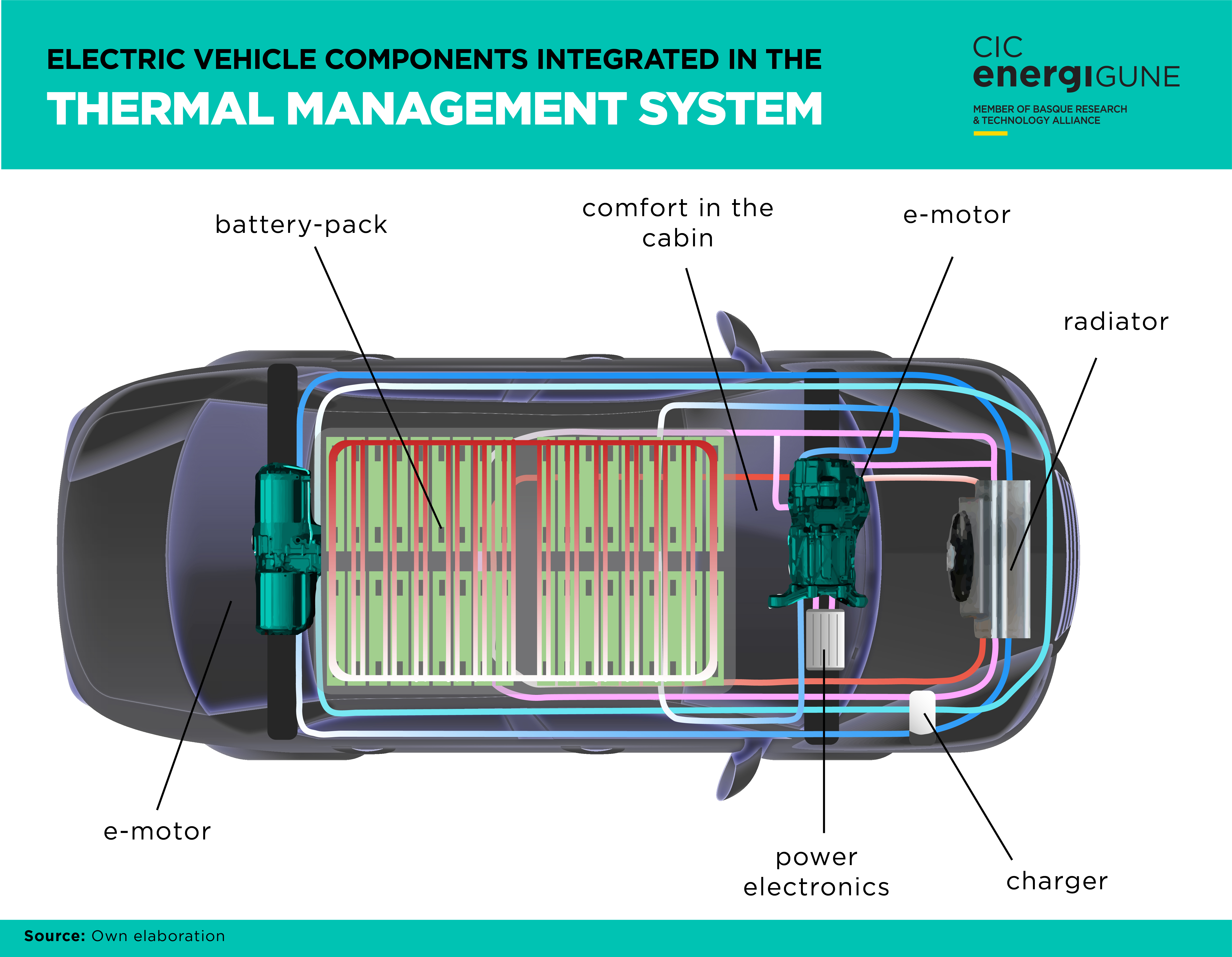 In general, manufacturers recommend slow or semi-fast charging to increase the lifetime of the battery pack. However, the industry is working on increasing the charging power allowed by the battery in order to minimize recharging times, especially for those cases in which journeys exceed the battery pack range.

At present, the industry´s challenge is to achieve electrochemical cells capable of prolonged charging at C-rates of 4 (powers up to 350 kW), which would be equivalent to being able to recharge 50% of the vehicle´s range in less than 10 minutes. This type of charging is known as extra fast charging (XFC). However, there is still some way to go. As an example, currently, the manufacturer with the highest commercially approved charging power is Tesla with the Model S and Model X, which allows maximum charges of up to 142 kW.

However, the challenge is not only in the cell electrochemistry, but also in the cooling system required, since it is estimated that, during extra fast charging, cooling powers of up to 15 kW will be required. To meet this need, the automotive industry points to the use of systems based on immersion in dielectric fluids as the only viable alternative to date.

Unlike the systems mentioned above, the battery pack may need to be heated (in cold climates, before a fast charge, etc.) or cooled (in summer, during fast charges, discharge process, etc.). This feature increases the complexity of the overall thermal management system and forces effective integration with the other components. Moreover, the thermal management requirements of this component are expected to vary substantially in the short/medium term, mainly driven by the entry of solid-state batteries in the electric vehicle. While Li-ion batteries with liquid electrolyte (currently used) have an optimum operating temperature between 15 and 35 ºC, but are capable of working outside this range, solid-state batteries work at high temperatures (currently around 70 ºC, although they are already in the process of reducing it to room temperature). This new scenario will increase the thermal demand of the battery pack and will require auxiliary heating systems for its entry into operation.

Currently, the industry tends to discard thermal management systems based on forced-air convection for batteries, mainly because of their high consumption, low efficiency and limited power, compared to liquid-based (indirect) systems. The latter is, today, the most widespread solution. In particular, most manufacturers are opting for what are known as "cold plates", which are becoming a mature, robust, efficient and safe technology to meet the needs of today´s electric vehicles.

With regard to future trends, it can be seen how the main efforts of the companies in the sector are focused on immersion in dielectric fluids, since, a priori, it is the only technology capable of providing the estimated cooling power for extra fast charging.

The role of simulation tools in thermal management

As can be seen from the previous paragraphs, there is a clear need for integration between the different components of the electric vehicle in order to thermally optimize its operation. The ultimate goal is to minimize the consumption of electrical energy for heat generation.

In meeting this objective and reducing the time and cost of design and manufacturing, simulation tools play a key role. In fact, it is more and more common to find studies of relevant companies in the sector using this type of tools, such as Ford OTOSAN, RIMAC Automobili, MAGNA, CAF, Volkswagen AG, etc.

There are mainly two types of simulation tools that are applied in the design and optimization of the thermal management system of the electric vehicle: software that allow to do it at the component level, such as CFD (computational fluid dynamics) tools like COMSOL Multiphysics, ANSYS Fluent, SimScale GmbH, etc, and those that allow it at system level, such as MATLAB-Simulink.

The role of thermal storage

A component that is not currently integrated in the electric vehicle but which is called to play an important role, especially when solid-state cells and the possibility of extra fast charging are consolidated, is the heat storage system.

In this direction, for example, IVECO S.p.A. is studying the implementation of a thermal energy storage system in its vehicles, since it is estimated that it can improve energy efficiency in winter by up to 20%.

The thermal storage technology with the greatest advantage for this application is based on phase change materials (PCMs), mainly because of their maturity, high energy density and ability to supply energy at constant temperature. In fact, vehicle component suppliers such as VALEO already have devices of this type in their catalog.

As can be seen from the large increase in sales, it can be certainly said that electric vehicles are already in a mature phase, however, there are still challenges around it, which will directly affect the thermal management system, with a clear trend towards more technologically advanced solutions.

In CIC energiGUNE we accept this challenge and that is why, from the area of thermal energy solutions (TES) area, we work together with our partner companies in the development and validation of simulation tools at different levels that allow us to design and optimize advanced thermal management solutions, relying on a platform for the characterization and prediction of thermal and electrochemical properties and behaviors at cell level and creating test benches that can integrate different thermal management solutions. 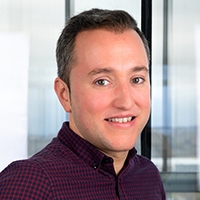