In spite of the difficulties derived from the sanitary crisis, the Basque Center has maintained during the last year a strong hand in research which has placed it on the Top 3 of the energy storage centers in Europe, with two Horizon2020 projects in which the center appears as a leader, two in which the center participates as a key agent, and three more financed by the Ministry of Science and Innovation.

CIC energiGUNE, the Basque research center of reference in electrochemical and thermal energy storage and a member of the Basque Research & Technology Alliance-BRTA, has managed to maintain in 2020 its position as a referent European center on matters of energy storage thanks to its strategic support on the battery for the electric vehicle of the future. In spite of the problems generated by the pandemic, last year the center was able to set in motion three projects financed by the program Horizon 2020 from the EU in which the center appears as the leader, and received economic support from the Ministry of Science and Innovation in order to undertake three more, apart from making 110 publications and registering 3 patents.

“The impact of the pandemic, even if hard, has not prevented us from continuing forward in out route map”, has assured General Manager Nuria Gisbert. “We are leading various key projects on matters of the battery of the electric vehicle, we are a world referent in research on solid-state battery, as well as storage batteries on a large scale and electricity generation. We count with professionals of international prestige, such as Michel Armand. We are a strong project with a future”.

Scientific Coordinator at the Electrochemical Area, Montse Casas-Cabanas -who took on the position halfway though last year after having developed most of her professional career at the center-, coincides in pointing out the capacity of talent attraction as one of the main strengths, even in a year as difficult as 2020. “The presence of professionals like Michel Armand or Elena Palomo, joined with maximum-level facilities such as the battery prototyping or thermal storage laboratories, allow us to face any project in the best conditions and with the most qualified resources”. 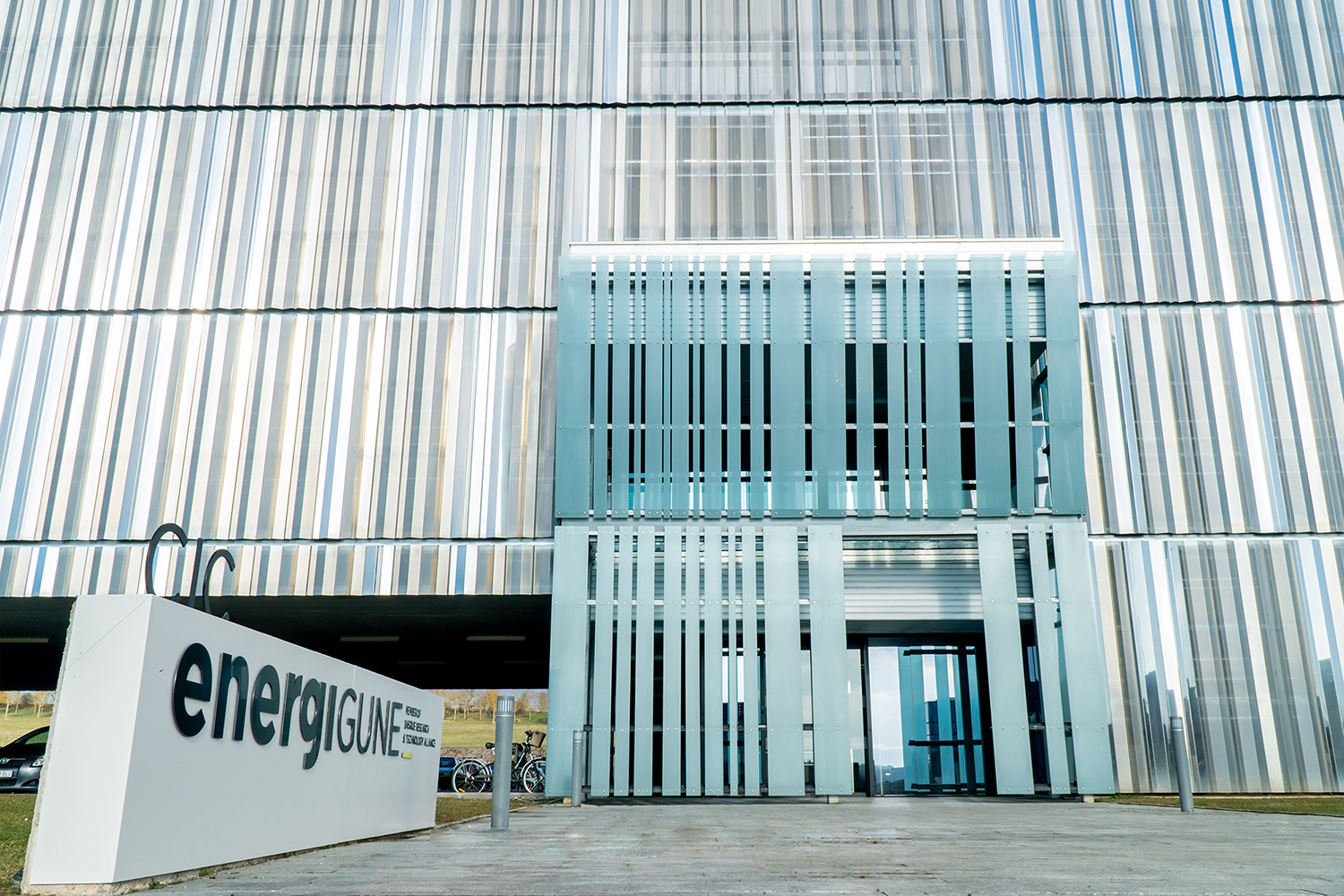 All through 2020 three have been the European project set in motion and lead by CIC energiGUNE, inside the framework of the EU’s Horizon 2020 program. In the first place, the project HIGREEW, conceived to allow the design of organic and 100% sustainable redox flow batteries which, connected to renewable energy systems, contribute to mitigate the impact of climate change, since they will favor the use of systems of energy storage that are more economical, with better technical performance and of higher efficiency. The project counts with a budget of 3.7 million euros, financed by the EU.

In second place, CIC energiGUNE leads the project SAFELiMOVE, which with a budget close to 8 million euros financed by the EU, aspires to develop a metallic lithium battery with solid electrolyte for the electric vehicle of the future that guarantees maximum security and efficiency. The task of the center is to coordinate all the research process and to develop an innovative hybrid electrolyte, as well as to analyze the behavior of the interphases.

The third H2020 project lead by CIC energiGUNE is ELECTRO INTRUSION, which aspires to recover environmental heat and the vibrations generated by the systems in order to convert them into useful electricity. Specifically, the project will allow converting the shock absorbers in cars intro electricity generators and will contribute to reducing the electrical consumption in the automotive sector up to a 4% in 2050.

In the case of the project SUBLIME, CIC energiGUNE leads the computational modeling process in order to predict and optimize the behavior of the cells that make up the battery, in a way in which they select very efficiently the best materials. This job is key for the consecution of the objective of the process, which consists on the development of a new generation of battery cells in a solid state that support themselves on inorganic electrolytes. The budget is of 7.8 million euros, also financed by the EU.

Likewise, the center is also part of the European project NRG-Storage, which aspires to put in the market a new material of thermal insulation for buildings that is more efficient, based on a multifunctional cement-like foam. CIC energiGUNE’s task will be centered on the characterization of all the ingredients of the compounds of the NRG foam.

Lastly, on matters of European projects, CIC energiGUNE participates in the COFBAT consortium, an initiative devised to develop cobalt-free batteries, of high capacity, more secure and durable for unchanging applications. The elimination of this mineral will suppose a lowering of the prices of the batteries of new generation, and will make them suitable for different applications that satisfy the increasing need for production and supply of decentralized energy for private homes and industrial robotized devices.

It needs to be reminded that the success rate of CIC energiGUNE in the H2020 call approaches 20%, above the European average (15%) and the Spanish average (14,6%).

On the other hand, and within the “Retos Investigación 2019” call from the Ministry of Science and Innovation, CIC energiGUNE has received in 2020 financing for the execution of three projects: NIB MOVE, focused on the identification of new materials that will improve the competitiveness of sodium-ion batteries; 3DACCESS, which pursues the creation of a solid-state battery of high density and cobalt-free, and ION SELF, focused on facilitating the experimentation process with new materials through artificial intelligence.

European ecosystem of the Battery

The position of CIC energiGUNE at a European level, as well as through the projects that have been mentioned, has been reinforced thanks to its active presence in the main forums of the sector. In this sense, it needs to be highlighted its incorporation into the Leading Group of the project BATTERY 2030Plus, made up by 22 organizations of 14 European countries in order to meet the challenges in research and design the batteries of the future that will allow Europe to lead the energetic transition. This organization, which was officially presented in September last year from Uppsala University (Sweden), is called to lead the process of constitution of the European ecosystem of the battery.

In line with this bet on being present in the main scientific and research forums of the continent, during the year 2020 CIC energiGUNE has also joined two big organizations. On the one hand, the European Clean Hydrogen Alliance, initiative promoted by the European Union in order to build an ecosystem with all the agents of the chain of value involved in the development of hydrogen. And, on the other hand, the European Raw Materials Alliance (ERMA), which aspires to reduce the dependence of the European Union in the field of critical raw materials, as well as improving the efficiency of the resources and diversifying the sources of supply.

With respect to its workforce, currently the center counts with 131 researchers, with parity in terms of gender and balance regarding countries of origin. In fact, 50% of the professionals come from outside of the Basque Country, with 14 different nationalities. Furthermore, the professionals in the center have participated in more than 50 conferences throughout the year and 20 events of the center itself. Likewise, a cumulative 53 collaborations with the industry have been counted along the year 2020.

In the month of July, the center carried out the renovation of its managerial-scientific team of its electrochemical area with the designation of doctor Montse Casas-Cabanas as new Scientific Coordinator and doctor Roberto Pacios as new Technological Coordinator. The Research area of storage of electrochemical energy is one of the pillars, along with the thermal area, of scientific work at CIC energiGUNE. With these appointments, the center has also reached parity in its managerial team, with which it positions itself as a reference agent on matters of equality in its field of action.

Lastly, it should be mentioned that the scientist at CIC energiGUNE Michel Armand has been included in 2020 for the second consecutive year in the prestigious list “Highly Cited Researchers”, that is annually produced by the company Clarivate Analytics with the scientists that count with works placed among the 1% of the most cited in their field of study during the same year.