As observed in the analysis carried out for Europe and the specific case of Spain, the gigafactories industry is not just a fad, but a strategic commitment that will attract wealth, employment and technological leadership to the countries and regions that are capable of leading its implementation.

Such is its attraction that no one wants to keep behind, and given Asia´s dominant position and Europe´s ambitious plans, North America is looking to take matters into its own hands.

Particularly, the USA is the main player in the region and the one who is most worried about missing the boat. So far, this country has partially stood out in the race to lead the lithium cell industry on which batteries are based; being the second country according to BloombergNEF with the largest installed production capacity (≈43 GWh in 2020, ≈10% of the world total); far behind China, which ranks first with ≈332 GWh (≈77% of the total) and with a notable advantage over Europe (the region as a whole ranks third, with ≈18 GWh representing ≈4% of the world total).

However, this scenario is expected to change in the coming years, mainly due to the acceleration in Europe. Thus, by 2025, according to the same sources, an increase of more than 300% in installed capacity worldwide is expected to reach ≈1,769 GWh.  China will continue to lead the market (with a share of ≈63 %), but Europe will now move into second place with a share of ≈15% (representing a capacity of ≈265 GWh), leaving the USA in third place, which will even lose total share (moving to ≈9%, with an estimated capacity of almost ≈159 GWh). 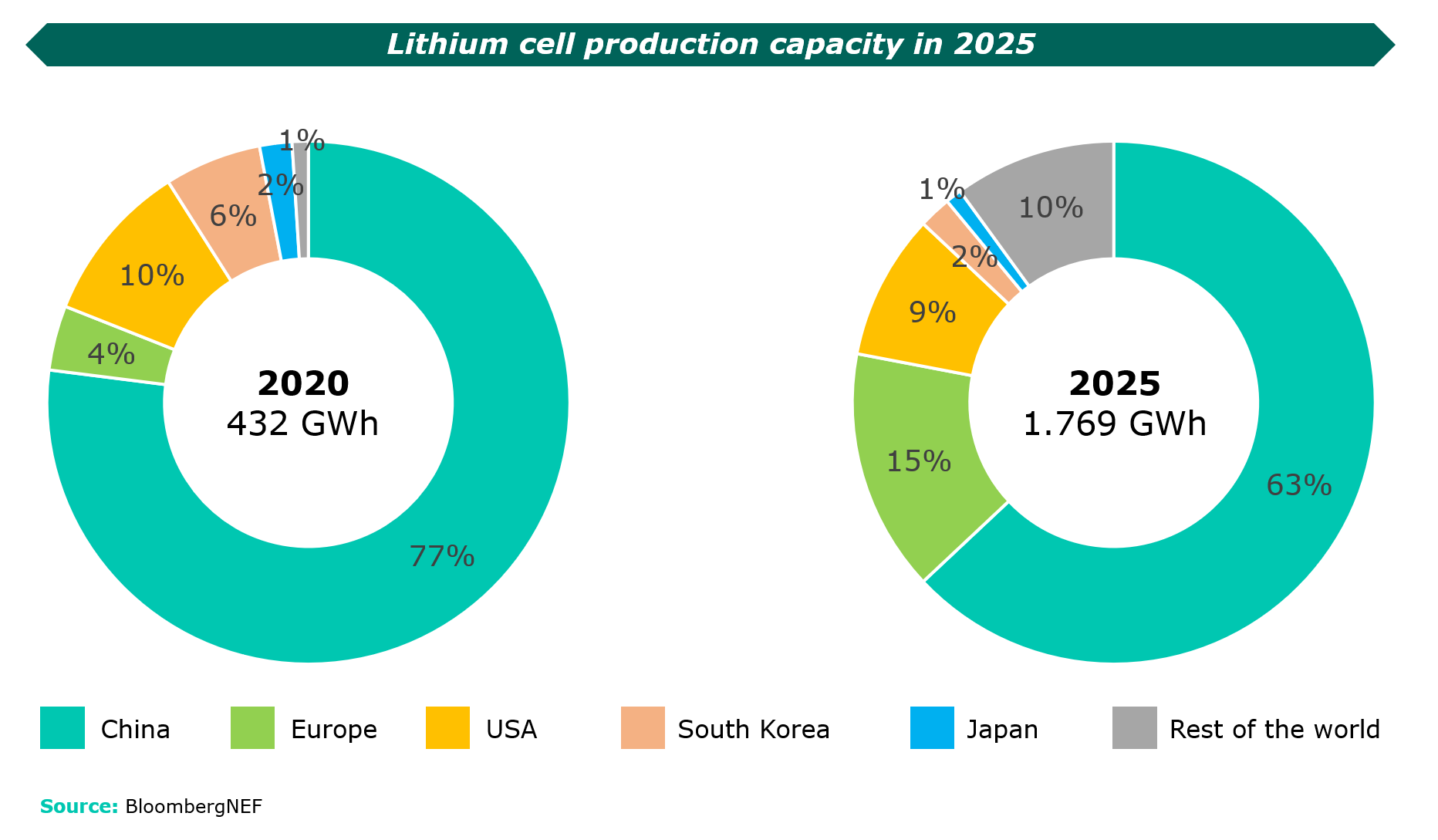 Therefore, based on short-term plans, it seems that the US will come out of this first battle for leadership of the industry less strong. However, the country currently under the presidency of Joe Biden has its sights set on the medium and long term, and has already announced an ambitious plan to try to catch up beyond 2025.

Since he became President of the White House last January, President Biden has highlighted among his major plans the promotion of the electric vehicle industry in the United States (unlike his predecessor, Donald Trump).

Specifically, within his $2 trillion plan to upgrade the country´s infrastructure, around $175 billion will go towards stimulating the electric vehicle industry in the US, both in terms of manufacturing and purchasing. Such is the expected impact of this plan that Forbes speaks of the "green tidal wave" that is coming for the electric vehicle industry and, therefore, for the essential batteries.

In fact, the industry already agrees on who will be the great beneficiary of this plan: Tesla. The US company, commanded by Elon Musk and in collaboration with Panasonic, is currently the best positioned to lead this transition and development of the industry, including the necessary increase in battery production capacity to be able to reach the ≈25 million electric vehicles in circulation that has been set as a target for 2030.

In fact, this initiative endorses the plan that Tesla was already working on in recent years in the US. Not in vain, the company currently has two operational gigafactories in the country (although one of them, the one in Buffalo, is not focused on batteries for the electromobility industry, but solar) and plans to open by the end of 2021 its macro gigafactory project in Texas. In addition, the company has developed a pilot line at its plant in Fremont, California, for the development of in-house research and experimental technologies.

Together with Tesla, another US giant such as General Motors also wants to gain strength in both the local and international market, even more so after the plan announced by the White House. Already in 2020, the company announced a joint venture with the Korean company LG Chem (called Ultium Cells), from which the project to install its first battery cell factory in Ohio has emerged.

Such are the expectations that both companies have with this project - and added to the potential growth of the market - that, without being operational yet (it is expected to be operational in early 2022), they have already announced the development of a second plant of similar characteristics in Tennessee for the year 2023.

In fact, for LG Chem, this is not its first plant in the country. Already in 2013 it opened its plant in Holland, Michigan, which currently has a capacity of around 5GWh but expects to increase in the coming years driven by its agreement with General Motors.

Also, another Korean company like SK Innovation (supplier of companies like Volkswagen and a giant in the American market like Ford) is being one of the big drivers of battery factories in the US.  It is currently planning the opening of its first two plants in the country, both in the state of Georgia and scheduled for 2021 and 2023 respectively.

It should be highlighted that both plants and the capacity that SK Innovation will have from them has unleashed great interest in the US automotive market, as they are the only two plants of those mentioned so far that do not have a captive demand (as is the case with the previous ones, where the cells are destined exclusively for Tesla and GM vehicles). In other words, their product will go to any end customer who needs it, which makes many analysts see it as an opportunity for new OEMs to bet on electromobility in the US and this will be a definitive boost for the country´s industry.

The start-up bet, the key to the long term

These are the most prominent gigafactory projects in the US today. However, following the aforementioned long-term vision, the country can present an even more promising future if the expectations around its ecosystem of start-ups related to battery production are met.

One of the most outstanding is Quantumscape, a company backed by investors such as Bill Gates and Volkswagen, which is committed to the development of solid-state batteries.  At the moment, this California-based start-up is working on developing its pilot production line for this technology at its headquarters in San Jose. The intention is to develop and scale up this pilot line, starting in 2024 and in collaboration with Volkswagen, in order to be able to mass produce its technology.

Other start-ups such as Sila Nanotechnologies have also announced their intention to have a full-scale production line by 2024. This company, located in Silicon Valley and financially supported by Daimler, announced last January its intention to start small-scale production this year to lay the foundations for mass production in three years. In its case, its product consists of silicon-dominant batteries, one of the alternatives with the greatest potential in the future.

Another outstanding case is Solid Power (a company supported, among others, by Ford), which launched its solid-state pilot line almost two years ago and hopes to scale up its model in the next few years with the help of Ford itself. This has also been recently announced by another startup, SolidEnergy, in this case with the support of General Motors and with the aim of producing high-capacity batteries from 2023 onwards. And these are just a few examples of the large ecosystem of new players that is being established in the United States.

Although we will have to wait to see how these announcements and intentions become reality, there is no doubt that the development of these plans may lead to a boost for the US battery industry, in order to retake the lead in the long term in the global race to lead this industry.

This promising outlook changes if we look at the other sides of the United States border. Unlike the US and other regions of the world, both Canada and Mexico are far behind in the development of this industry.

In Canada´s case, despite having the resources and potential to be a leading country in the industry, right now there are only plans to develop a gigafactory project, associated with the company Lion Electric. This company announced in March 2021 its plan to open a battery plant in early 2023 in Quebec, with an estimated capacity of 5 GWh (in addition to an innovation center to support the plant).

This lack of projects and initiatives is largely due to a basic fact that determines the industry: there is currently no OEM in Canada that is producing electric vehicles in the country.

However, everything seems to indicate that this situation will change in the coming years, precisely thanks to US plans. The impact of the growth of electric vehicles in its southern neighbor will have repercussions in Canada, which could become a supplier for large US-based OEMs.

The best example of this case is the Ontario region, which due to its proximity to Detroit (home to large production plants that plan to manufacture electric models), is already working on attracting large investors to the region to take advantage of this circumstance. Rumors have also begun about potential interest in setting up new plants in the country by companies such as Britishvolt.

On the other hand, forecasts for Mexico are not so optimistic. With the exception of some rumors that were later denied as a possible location for a Tesla gigafactory, there has been no other news in recent months about potential project developments in the country. So far, the closest thing to the battery industry has been the announcement late last year by China´s Ganfeng Lithium (a Tesla supplier), which will build a lithium-ion battery recycling plant in the state of Sonora, in the northwest of the country.

The industry´s prospects are confident that, as is happening in Canada, the expected growth in the US will drag Mexico along with it, thereby increasing projects and investment in plants in the coming years (especially in the regions close to the US border).

In conclusion, it seems clear that the engine of the North American battery industry is located in the US, which seeks to lead growth, not only regionally, but also globally. It remains to be seen whether Biden´s plans meet the expectations generated and what impact they have not only on the country, but also on its neighbors. Whether or not the region will be "plugged in" to one of the industries of the future in the coming years will depend on it.

To summarize, CIC energiGUNE has published a high-level map that includes some of the major initiatives in the region: 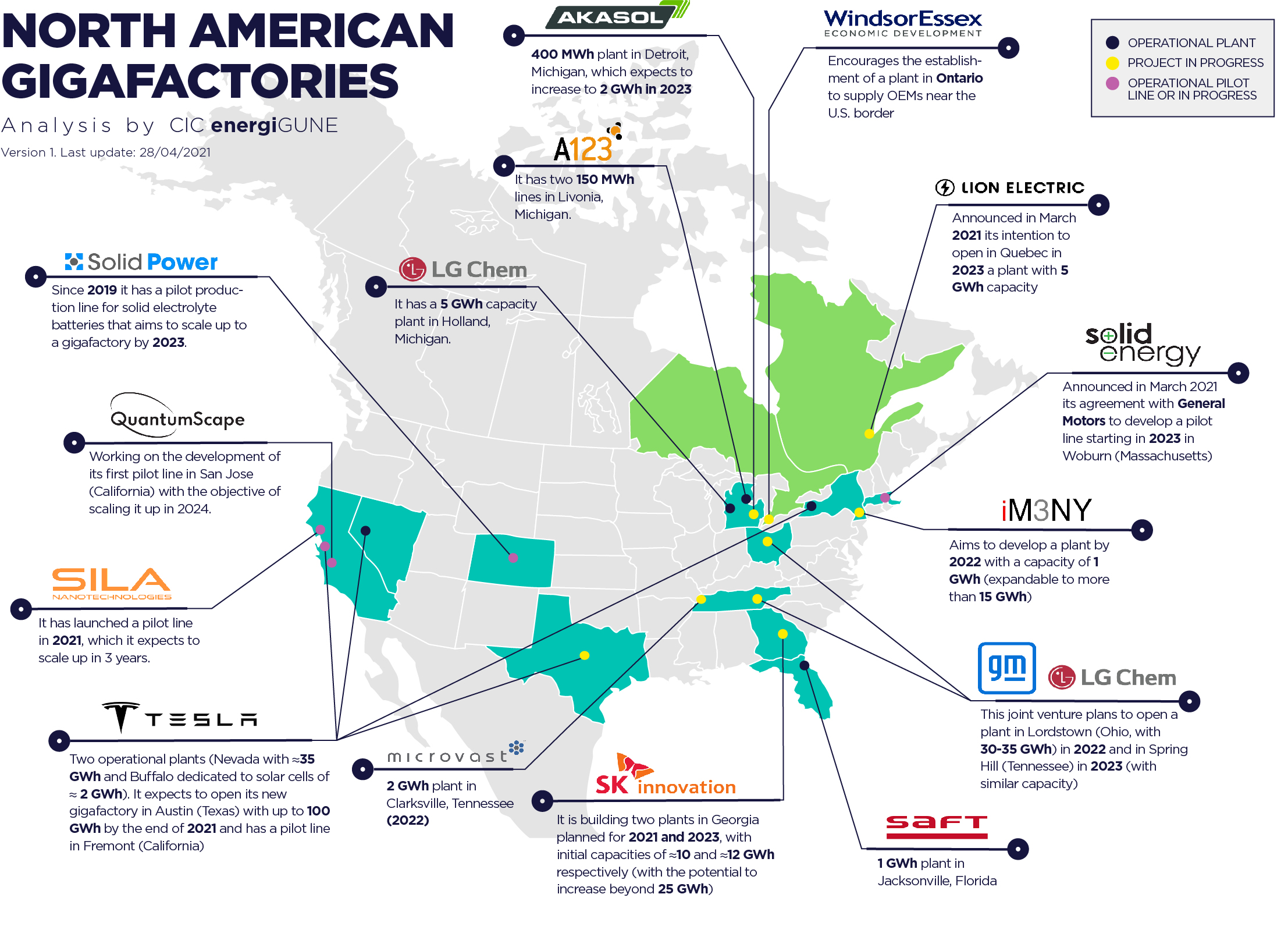 *For an updated version of the map, visit: North America accelerates its commitment to the development of the gigafactory industry. 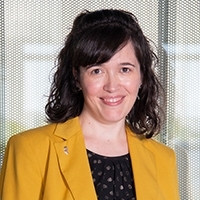 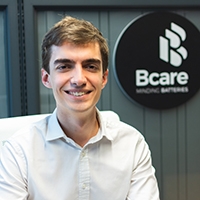