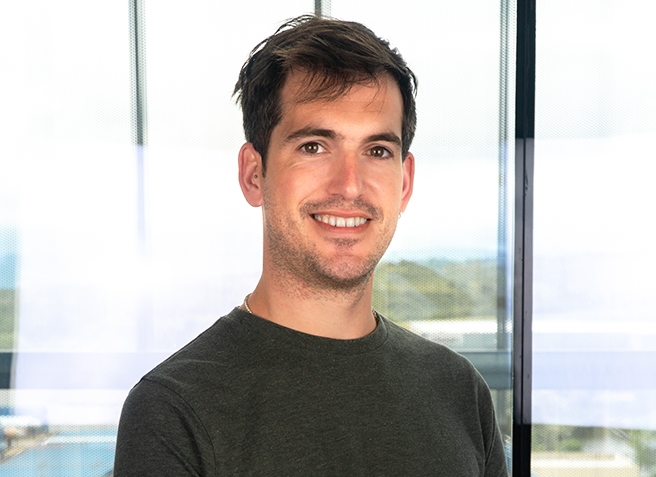 Julen Etxabe obtained his degree in Chemistry in the University of the Basque Country (UPV/EHU) in 2010, after developing my last year project in a 9 month stay (Erasmus grant) in Dr. Kenneth Wärnmark’s group (Kemicentrum, Lunds universitet, Lund, Sweden), where he worked on the development of heterobimetallic organocomplexes for the enantioselective ring opening of meso-epoxides. That year he joined Prof. Claudio Palomo’s research group in the Organic Chemistry I Department (Faculty of Chemistry in San Sebastian), first to obtain the Master’s degree in Synthetic and Industrial Chemistry, and after to perform a Doctoral Thesis as part of the same program, under the supervision of Prof. Claudio Palomo and Dr. Aitor Landa. His thesis work consisted in the catalytic enantioselective synthesis of tertiary thiols and N,Cα,Cα-trisubstituted α-amino acid derivatives through the bifunctional Brønsted base-catalyzed Michael addition of 5H-thiazol-4-ones  and 1H-imidazol-4(5H)-ones to diverse electrophiles (nitroolefins, tert-butyl azadicarboxylate, α’-hydroxyenones), respectively. After his PhD defense (February 2016), he obtained a grant for recent Doctors from the UPV/EHU, where he stayed until his incorporation to Dr. Gilles Guichard’s group (UMR5248, CBMN@IECB, Pessac, Bordeaux, France, September 2016 - August 2017) thanks to a postdoctoral CNRS contract, where he worked on the synthesis, study and application of new helical oligourea foldamers as organocatalysts. In 2018, he obtained a Doctor specialization grant from the UPV/EHU, where he worked on the enantioselective synthesis of 5,5-disubtituted hydantoins and the addition of alkynyl ketones to nitroolefins, until January 2020.